A Conversation With Kelcey Parker Ervick 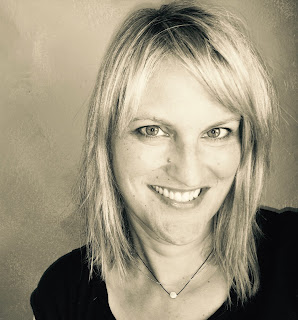 Kelcey Parker Ervick has travelled to Prague regularly since 2003 and currently directs an overseas study program to Prague and Berlin, where students create collage journals inspired by artists such as Hannah Höch, Toyen (Marie Čermínová), and Jiří Kolář. She is the author of the story collection For Sale By Owner (Kore Press) and of Liliane’s Balcony (Rose Metal Press), a novella-in-flash set at Frank Lloyd Wright’s Fallingwater and winner of silver medal awards from the IPPY, Foreword, and Eric Hoffer Book Awards. A recipient of grants from the Indiana Arts Commission and the Sustainable Arts Foundation, she teaches creative writing and literary collage at Indiana University South Bend. Her blog features interviews with contemporary writers and the series, “Letters to Dead Authors”.

The Bitter Life of Božena Němcová A Biographical Collage by Kelcey Parker Ervick. Artistic, rebellious, and unapologetically intelligent, Božena Němcová defied every convention for a woman in mid-nineteenth-century Bohemia: she was active in nationalist politics, she smoked cigars, she took a series of lovers, and she laid bare her ideas and emotions in her letters and stories.

“The Bitter Life of Božena Němcová by Kelcey Parker Ervick is one of the least bitter, most loving books I have read in a long time, and it’s beautifully made. Fans of Jenny Boully’s not merely because of the unknown that was stalking toward them and Maggie Nelson’s The Argonauts—frankly, anyone interested in fairy tales and in memory and in desire—should read this haunting biographical collage. It’s a terrific work of lyric nonfiction, a form underrepresented on the fairy tale shelves.”

—KATE BERNHEIMER, author of How a Mother Weaned Her Girl from Fairy Tales 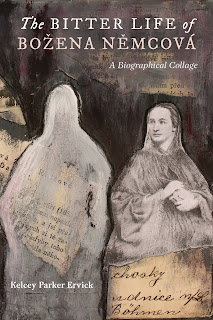 The Bitter Life of Božena Němcová is a biographical collage of found texts, footnotes, fragments, and images by and about the Czech fairy tale writer, whom Milan Kundera calls the “Mother of Czech Prose.” Kelcey Parker Ervick’s innovative collage form, with its many voices and viewpoints, questions the concept of biographical “truth” while also revealing a nuanced and spellbinding portrait of Němcová. Inspired by Němcová’s letters, the book’s second section, “Postcards to Božena” is Parker Ervick’s epistolary memoir of her own failing marriage and her quest for a Czech typewriter, as well as a meditation on reading, writing, and happy endings. The two sections combine to create a book as defiant, enchanting, and complex as its namesake.

We would like to thank Kelcey for taking part in A Conversation With... and wish her huge success with her latest book and her future writing.

Growing up, I was an athlete. I played soccer (football to the rest of the world), softball, and basketball. In track and field, I did the high jump, the long jump, the hurdles. In fourth grade I was given a certificate: Best Athlete. My senior class voted me Most Athletic. On my university soccer team, I was the Most Valuable Player. As an athlete, I learned discipline, I learned to practice regularly, and I learned to trust my mind and body. But I did not learn that I could be a writer. In fact, I became wrapped up in that identity and believed it excluded being a writer. I was an athlete, not a writer.

But my competitive athletic career ended was I was twenty-three years old, and I became an English teacher (for I was reading and writing all along). I was no longer an athlete, and I hated being a coach. I began to explore other possibilities, and slowly I gave myself permission to pursue writing. It helped that I could get a degree in it: something to make it seem legitimate rather than a hobby that took me from my young child. The stories I wrote in grad school were the first ones I published, and several of them are in my book, For Sale By Owner. And I haven’t stopped since.

I create counter-narratives. I explore the lives of my characters - both fictional and historical - and imagine alternate possibilities that often contradict received narratives about who they are, who we are. Everything in this world wants to limit and box and stereotype; I want to expand and complicate and imagine.

Just one? I’ll pick a contemporary British one: Inglorious by Joanna Kavenna. The prose sweeps you up with its music and rhythm, and the humor is so subtle and smart. Rosa Lane leaves her ridiculous job and loses her long-term boyfriend and spirals into a depression that is at once psychological, financial, and existential.

Writing is hard, but it’s not rocket science and it’s not magic. You have to commit to it, and you have to do it. All of IT: the reading, the writing, the revising, the submitting, the self-soothing when you get rejected, and the celebration when you get published.

Graphic stories, poetry comics? I’m not sure what to call them exactly. In my new book, The Bitter Life of Božena Němcová, I loved creating visual art as a companion to the story. I’m working on a chapbook of stories told through a combo of image and text. I’m inspired by the work of Maira Kalman, Aiden Koch, and Bianca Stone.

Harriet the Spy. I still have my composition notebooks filled with ridiculous observations I made while spying on family and friends.

Your last two books were fiction. How did the change from fiction to biography/memoir occur?

My first book was composed of short stories based on my life as a young mother. My second book was historical fiction about an unknown female historical figure: Liliane Kaufmann of Frank Lloyd Wright’s Fallingwater house. My third book was a biography of another unknown female historical figure, the nineteenth-century Czech fairy tale writer, Božena Němcová. As I wrote ABOUT her, I decided to also write TO her – a series of postcards – and those postcards became a memoir of my travels, research, and ultimately, my divorce.

The change from fiction to biography/memoir seemed major in that the “I” now represented me in an unfiltered way, but looking back, the fiction and nonfiction were just different ways to explore similar stories about the lives of women in different moments in history.

Posted by Greenacre Writers at 14:55