A conversation with Mary Lynn Bracht

Mary Lynn Bracht completed an MA in Creative Writing at Birbeck, University of London. An American author of Korean descent living in London, she grew up in a large expat community of women who came of age in post-war South Korea.

In 2002 Bracht visited her mother’s childhood village, and it was during this trip she first learned of the “comfort women”.

White Chrysanthemum is her first novel and has earned Bracht a place on The Guardian’s list of new faces of fiction 2018.

“Bracht has fashioned her own memorial to the comfort women. White Chrysanthemum is a timely and furiously felt book” The Guardian. 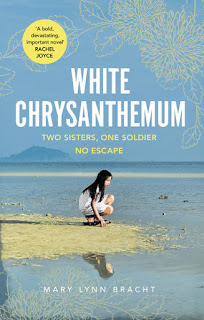 White Chrysanthemum is the story of two sisters, Hana and Emi. Hana’s narrative tells of her captivity during 1943 while Korea is still under occupation of the Japanese while Emi’s story is set in 2011 and gives a reflective account of her life and how it has been affected by war and the separation from her sister.

It is a harrowing piece of history told with honesty and passion and provides an emotional and gripping read. A full review is available here.

Thank you Mary for taking part in our conversation and we wish you every success with White Chrysanthemum it is a super novel.

I was twenty-nine years old before I allowed myself to commit to becoming a writer. At the time, I was looking back on my nearly thirty years of life deciding what I wanted to do with the next thirty years, and I thought the one thing I would regret if I never tried was to become a writer. So, I gave myself permission to take the time to write. That meant accepting that my financial life would be difficult (probably forever), that it might take years or decades to succeed, and that it might never happen. I took my first writing class, a novel writing course in Dallas, and after three terms, wrote my first novel. It took many more stories, novels and years before I finally wrote White Chrysanthemum, but it began with giving myself time and permission to write.

I see my role as a storyteller. In early human history, storytelling was an oral tradition that passed knowledge from one generation to the next. It was our way of remembering the past and understanding the world around us, while being entertained. Today, this storytelling tradition continues in many forms, but as novelists, the pace of reading allows the human mind to slow down and truly live through the stories written on the page, where a lifetime can feel like a lifetime and a cliff-hanger can keep you up well past bedtime.

I like most that the novel can transcend social and physical boundaries, often reaching far flung places of the world through translation. It is a privilege for me to have this opportunity to share my story with people in my own city, as well as those on the other side of the the world.

Yes, definitely. I think every villain, if written well, has a side that we empathise with, whether it’s a tragic childhood, chronic misunderstanding, or simply ill-judged motivations. In White Chrysanthemum, Morimoto is the ultimate villain, but he too has his own story of loss, which gives insight into his motivations.

Growing up in a military town with a multi-ethnic community of people from all over the world, writing diverse characters comes naturally to me. In my novel, I write about Koreans, Mongolians, Japanese and Soviets.

When I was a girl, I fell in love with Eeyore because he was beautifully flawed. I think it was his blue point-of-view that made him so loveable.

I would want to be on an empty stretch of sandy beach, listening to the waves as they crash upon the shore and feeling the warmth of the sand beneath my bare feet. I live in London, and right now it is cold and wet. I’m desperate for some sun!

I wish I had written The Power by Naomi Alderman. She successfully flips misogyny on its head to reveal the real-life suffering of women currently happening all over the world through a fresh perspective.

I’m currently working on a novel and hope to have it written before the year’s end. It’s about the bond between a mother and her daughter, tested over tragic events