My favourite reads from 2015

Everybody seems to be putting up lists of books they enjoyed reading in 2015. It's what a lot of readers and writers like to do. Here are ten of mine, in no particular order:

The Gap of Time (2015) by Jeanette Winterson

Winterson’s cover version of The Winter’s Tale is one of the Hogarth Shakespeare series, celebrating 400 years since the Baird was born. This fast-paced story is about a foundling, a stolen child, an abandoned child, and fits in perfectly with my obsession and PhD research about orphans and care leavers in fiction.

Half a Yellow Sun (2006) by Chimamanda Ngozi Adichie

I'd put off reading this text as I remembered the starving children from my childhood and was too frightened to read about the horrors of the Nigeria-Biafra war. Yet, once I'd started, and from the first page, I found myself transported and immersed in Adichie's vivid landscape and characters. 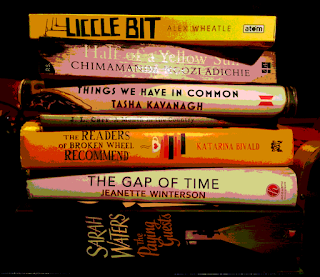 The Readers of Broken Wheel Recommend (2015) by Katarina Bivald

This is a book that I shall read again in a few years. It is a clever book and still has some way to go in being recognised as the future classic it will become.

This was one of the first books I read last year, and that I had been anticipating for some time. It was worth the wait. After a childhood spent in care at Burbank Children’s Home, Paolo Hewitt embarks upon a personal journey as an adult to discover whatever happened to his close childhood friends.

Things we have in Common (2015) by Tasha Kavanagh

The novel describes a creepy tale of loneliness and teenage obsession. Poignant and darkly humourous, it was at times overwhelming - in a good way. Tasha was a guest at last year's Finchley Literary Festival*, little did we know at the time that not only would the book be shortlisted for the Not the Booker Prize, but also the Costa Book Award.

The Paying Guests (2014) by Sarah Waters

Greenacre Writers was selected as one of 12 book clubs who were shadowing the Baileys Women's Prize for Fiction 2015. We were given The Paying Guests by Sarah Waters and some very nice Baileys!

For the first half of this book I couldn't read past 6.00pm because I was absolutely petrified. The story seemed so real and I don't usually read books about zombies. When Mike appeared at the festival, some of us dressed up as zombies. He got us reading parts for the soon to be released film. I was Melanie, a young 'hungry' zombie, though in reality I was probably fifty years too old! Still, it was such fun and I can't wait to see the film.

On one of my recent trips to Waterstones, in North Finchley, my local bookstore, I got chatting with one of the lovely bookish assistants. We were discussing favourite books and he told me one of his was A Month in the Country. I decided to nominate it as the Greenacre Writers September Bookclub. It is the fifth novel by J. L. Carr, first published in 1980 and nominated for the Booker Prize. The book won the Guardian Fiction Prize in 1980.


Antonia is one of those writers who light up a room. She attended the Finchley Lit Fest and I found myself truly inspired and moved by some of her writerly observations. The Ship is her debut novel but not her first. She has been on her writing journey for some years. In some ways, The Ship is scarier than zombies because the financial apocalypse could happen at any moment.

Another FLF favourite guest. When I read this YA book, I was so impressed by the use of language I began raving about it immediately. It's both funny and heartbreakingly moving. It takes as its subject, the dangerous ease with which young boys can get involved with gangs. At its heart is family, or the lack of it and the dangers this can bring. Liccle Bit has recently been nominated for the 2016 CILIP Carnegie Medal.


All that is left for me to do now, is wish you a very healthy, creative, and booky New Year.

Posted by Rosie Longstocking at 02:28

A wonderful list, I am intrigued to read Jeanette Winterson's book and like that some of your favourites were also books where you got to listen to the author speak, I love literary festivals for that, how they really spin magic and add so much to the subsequent reading of a book. I remember seeing lots of reviews of The Ship, I must add that to my list too.

I wish I could just lay my hands on one of those listed books above, except Chimamanda's Half of a Yellow Sun - that almost glued into my eyes, for the love of reading it - I'd be very happy.