A Conversation with Peter Cunningham 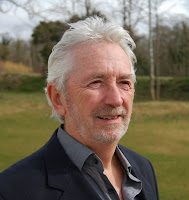 Peter Cunningham is from Waterford in the south east of Ireland. He is the author of the Monument series, widely acclaimed novels set in a fictional version of his home town. His novel, The Taoiseach was a controversial best seller. He is a member of Aosdána, the Irish academy of arts and letters.

‘Peter Cunningham’s superbly crafted psychological thriller echoes the terse battle of wits between a wily angler and a wilier trout who has mastered how to hide unseen in plain sight. It is a masterly study of a man whose life is turned upside-down by childhood secrets in an Ireland where evil could hide in plain sight because nobody had the courage to confront it. Now the consequences of his past must be confronted, no matter at what danger to himself and to those he loves. Packed with canny and uncanny insight, The Trout grows into a mesmerising read.’ Dermot Bolger

In a spellbinding story of one man’s search for the crucial secret locked in his memory since childhood, The Trout bursts up through the conventions and falsehoods of the past and hangs, beautiful and shimmering, in the clear and vital light of truth.

Alex and his wife Kay live in Bayport, near Toronto, on the shore of Lake Muskoka.  Alex is getting ready to publish his second novel when he receives a package from his publisher containing a curious insect: a fly for fishing.

This discovery awakens in him painful memories from childhood of an overbearing father, priests who are troubled and in trouble and a betrayed friend in an Ireland in which everything is known but not talked about…

Alex and Kay had began their relationship many years ago in Ireland where Alex was destined to become a priest. His father, a well-respected doctor, is immensely proud of him until the day Alex meets Kay, a meeting which changes Alex’s life and his relationship with his father forever.

Rejected by his father and his friends, Alex and Kay eventually settle in Canada to lead a normal family life. Normal life, however, is only a thin veneer covering a world of childhood secrets and lies and when the mysterious letter arrives it triggers a long-buried guilt in Alex, leading him to risk all to track down its secrets.

When I was ten years old I began writing stories for the Christmas supplements of the local newspapers in Waterford. These were usually ghost stories that I had already tried out at bedtime on my sisters and they involved deserted mansions, creaking doors, and large, terrifying spiders. I remember how thrilling it was the first time I saw my name in print.

I have always written, even when I worked at other jobs. As a teenager in Paris, where I washed dishes in a restaurant in Montmartre, I wrote fiction that was very self-consciously Joycean. In London, I painted barges on the Thames by day and wrote stories at night. When I got a job on the floor of the New York Stock Exchange – relaying telephone orders to floor traders – I was also writing a short story that would, several years later, go on to be published in the well-known New Irish Writing pages of the Irish Press.

Nonetheless, I was almost forty before I attempted a novel. A thriller, called Noble Lord, it was begun on holiday, finished in six months and sold within three weeks to HarperCollins. Never has there been a moment when writing has not been central to my life. It is what I do, and I feel very fortunate to still be able to do it.

I am a storyteller, which in Irish is seanachaí, an ancient and honourable occupation.  Writing is my obsession, my addiction and my job. It is the only area of my life in which I am truly patient. W. H. Auden, when asked what he thought of something, answered, ‘How do I know what I think until I see what I write?’ That sums up my thought process.  Every morning, usually early, I sit down and resume whatever I was writing the day before; and when that book is finished, I begin another.
I’ve never thought much about my role, even though for years I have been chronicling many of the issues that have consumed modern Ireland. If I get my readers to see the world around them in a fresh, exciting and different way, then I will have achieved something.
I love the cocoon that envelops me when I’m writing, and in which time stands still. The process of creativity is so beguiling and mysterious. I feel that writing offers me redemption.

Some of my characters are very dark and devious – in The Trout, my new novel, several such characters are hiding in plain sight.
Sometimes a character emerges and takes over the story. When this happens, it’s very stimulating: as the writer, I know I’m on to something. How does this happen? I’m not completely sure. I just know when I hear that character’s voice – even if he or she is a rogue – that the voice is authentic.
My novel, The Taoiseach, based in part on the life and times of former Irish Prime Minister, Charlie Haughey, threw up a dark, central character whom I grew to admire and despise in equal measure. There are now plans to make The Taoiseach into a six-part mini-series for television.

Writing diverse characters does not trouble me. Most of my novels are written in the first person, and in each case it can take me many months to get inside the head of my new protagonist. Nor does gender worry me, one way or another. My novel, The Sea and the Silence, is written in the first person, entirely from the point of view of a woman. I thoroughly enjoyed writing that novel and plan to repeat the experience before too long.
Much of The Trout is told from the point of view of a seven year-old boy. That was difficult and took me nearly five years to write.

I’m extremely lucky insofar as I often write overlooking the sea in County Waterford, which is one of the most beautiful places in the world. There are, admittedly, dark days in mid-winter when I dream of being in Sydney, where my maternal grandfather came from, but the truth is that entombed in the Irish winter I write best.

In Search of Lost Time by Marcel Proust.  An elderly French lady who I met many years ago in Normandy, told me that she was going home to Paris to read Proust again before she died. What greater accolade could a writer seek?

Get into a routine. Don’t be afraid to let it all pour out. Forget rules.  Be patient. Remember that all writing is rewriting. Read your work aloud – it’s amazing how infelicities emerge when spoken. When you are re-reading what you have written, beware of the passages you are tempted to skip. If you feel like skipping them, imagine how your readers will feel. Try and get your finished work into the hands of a professional – an agent, or editor, or someone who reviews books.  My dear friend, the late Maeve Binchy, and her writer husband, Gordon Snell, wrote side by side every morning, and then handed over their work to each other for criticism. Maeve told me that this exercise was usually followed by a twenty minute period given over to sulking.

A novel, The Secrets, which is scheduled for publication by Sandstone Press in late 2017.

Hercule Poirot, followed closely by Sherlock Holmes. I devoured those books as a child – it’s no coincidence that Agatha Christie and Arthur Conan Doyle write very well. I had read everything both of them wrote before I went away to school.

The Trout is published by Sandstone Press

Posted by Greenacre Writers at 10:44