Abda Khan’s Stained, begins with her protagonist finding justice to her attacker with a captivating opening chapter told through Selina’s eyes after being raped. Khan threads the story in the following chapters feeding readers with the complexity of the so-called ‘dark issues’ in Asian communities dwelling into pride, hypocrisy and shame issues surrounding the taboo of exposing adulteries and indecencies. 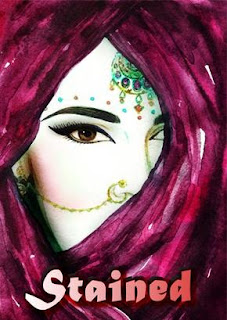 There are some similarities to Monica Ali’s Brick Lane and the character of Nazneen. Selina and Nazneen are the same age and both young women are smart and self motivated. Nazneen, Ali’s protagonist, defies expectations to begin with; she is thought to have been died after birth – to Selina with her energetic personality and high aspirations. Nazneen is a young bride brought over from Bangladesh with no English, whereas Selina was born and bred in Bradford, both are trapped in their respective circumstances with little freedom; the former is in one of the Tower Hamlets high-rise council flats whilst the latter in an untimely pregnancy and an impending arranged marriage against her wish.

In Brick Lane, Ali highlights the imposed alienation of being uprooted, loneliness and an unhappy marriage that leads to her haram relationship with Karim. Stained exploits guilt and culpability whereby a terrified girl has to think fast to uphold her family honour. Nonetheless, both novels are upbeat in divulging intriguing taboos that are much influenced by the South Asian cultural interpretation of Islamic values.

Khan does her job well using first-person account to illustrate Selina’s dilemma of being a dutiful daughter and a terrified girl battling her fears, shame and anxiety. She is eloquent but vulnerable, a reliable voice with vivid observation. The plot thickens, as she is faced with her attacker in her home a year later and is about to be attacked again. What’s more, the downfall of Selina seems to mirror Ali’s climax of Nazneen’s adultery with Karim. Stained becomes more interesting as Selina has to bear the consequences of her action.

I like Selina a lot – her attitude and her resilience. It’s easy to have a lot of sympathy for her. Her choice of phrases and expressions emulates little paraphrasing and bears little semblance to the mind of a young girl’s uphill battle growing up as a British Muslim whose world is a clash between traditional upbringing and secular society.

Personally, I believe the strength of the book lies with its minor characters. Nevertheless, there is not much said about their back stories; e.g. Zubeir and his background; the making of a sexual predator masked in high education and a glowing reputation as a scholar and a family man.

The real life Rotherham sexual abuse case exposed men in the same league as Zubeir. What’s more, Khan shows that there are other victims of his that then come out in the story. By the same token, they are only briefly described for the sake of the subplots.

I recommend this book because the need for ‘following up’ the Rotherham case is greater than ever. Young girls should be perpetually reminded of the signs of grooming by older men and how dangerous they are. I hope what happens in Selina’s world can inspire other girls with similar experiences to come forward and seek justice for themselves.

Posted by Greenacre Writers at 01:21