A Conversation With Pam Jenoff Pam Jenoff is the internationally bestselling author of several novels, including The Kommandant’s Girl, which was a finalist for both the Quill awards and the American Library Association’s Sophie Brody Medal. Pam draws inspiration for her books from her service as a diplomat for the State Department in Europe working on Holocaust issues, and her experiences as the politically-appointed Special Assistant to the Secretary of the Army at the Pentagon. She also practiced law at a large firm and in-house, and is on the faculty of Rutgers School of Law. Pam received her bachelor’s degree in international affairs from The George Washington University, her master’s degree in history from Cambridge University, and her juris doctor degree from the University of Pennsylvania. She lives outside Philadelphia with her husband and three children. Pam's latest novel, An Orphan's Tale is based on real events.

In Nazi-occupied Holland, seventeen-year-old Noa snatches a baby from a train bound for the concentration camps, fleeing with him into the snowy wilderness surrounding the train tracks. 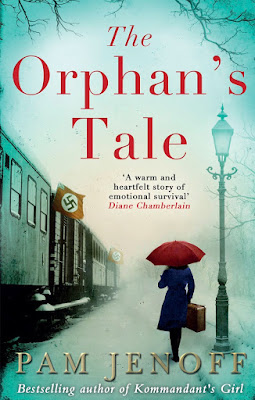 Passing through the woods is a German circus, led by the heroic Herr Neuhoff. They agree to take in Noa and the baby, on one condition: to earn her keep, Noa must master the flying trapeze under the tutorage of mysterious aerialist, Astrid.

‘Wonderfully compelling… The story grips from the very first page, and the atmosphere of the circus is entrancing – you feel all the terror and thrill of the flying trapeze.’

Soaring high above the crowds, Noa and Astrid must learn to trust one another or plummet. But with the threat of war closing in, loyalty can become the most dangerous trait of all.

Pam says of the book:
'A few years ago while researching I came across two remarkable stories in the archives of Yad Vashem. The first was a heartbreaking account of the “Unknown Children” – a boxcar full of babies, ripped from their families and headed for a concentration camp, too young to know their own names. The second was a story of a German circus that had sheltered Jews during the war. There was a rich history of Jewish circus dynasties that spanned centuries, and other circus families which had ten or more siblings performing and/or running the circus. Sadly they were largely annihilated by the Germans. Reading the remarkable histories of the Unknown Children and the circuses, I knew that they somehow had to come together.

I have taken great liberties with the nature of the circus acts and the ways in which they lived and performed during the war. But I was so inspired by the real people I’d met in my research. When the circus owner Adolf Althoff received the honour of being named Righteous Among Nations by Yad Vashem in 1995, he said, “We circus people see no difference between races or religions.” I consider this book to be a tribute to the courage of these people.'

We'd like to thank Pam for taking part in A Conversation With...and wish her much success with her very moving story, The Orphan's Tale.

My stories come out of my years in Poland working on Holocaust issues for the State Department. I was profoundly moved and changed by those experiences and knew I wanted to write a book about them in novel form. But while I had inspiration, as well as the childhood dream of becoming a novelist, I never quite got started. The turning point was 9/11. I had gone to law school and began practicing as a lawyer on September 4, 2001 – exactly one week before 9/11. That day was an epiphany for me: I realized I didn’t have forever to fullfill my novelist dream. So I took a night course and began writing. It wasn’t a smooth path from there. I was an attorney and had to write from 5-7 in the morning each day. Also, it was 5 years and 39 rejections before a publisher accepted my first work.

Most of my books center around World War II. I consider them love songs to the people who lived through that era and I feel a great responsibility to tell a story well, accurately and with respect.

I often write dislikeable characters. I find them more interesting. The question is to see what motivates them. For example, I once wrote a book about a Nazi Kommandant and then wrote a prequel exploring how he had become that person as a result of the Great War.

One thing I love is to explore the gray areas in people. So, for example, if I am writing about the war, my German characters are not all bad, my Jewish characters are not perfect and my ordinary folks (Poles, etc.) are somewhere in between. Some readers are not comfortable with diverse characters who are drawn in more complex and nuanced ways, but I think it makes for better storytelling that is more true to life.

That’s a tough question. I have written in palaces in Europe and in mountaintop retreats in Banff. But I have also written in my doctor’s waiting room and in my car and I can tell you which coffee shops in my neighbourhood open at 6am on a Sunday. Being away is great but ultimately I prefer being close to loved ones, in an ordinary day’s routine and writing in my office.

Many! But of late, All The Light We Cannot See. Just such beautiful prose.

Be disciplined. You have to carve out and protect your writing time really zealously. You make the time to do it. Be tenacious. Don’t give up. It took me a long time to get published and I think that the only thing that stands between me and lots of other really more talented writers who are not published is that I just kept going. I also think the ability to revise makes a huge difference. The ability to take feedback from an agent or an editor or a peer group and incorporate that into your work makes all the difference.

My new book, The Orphan’s Tale, is just coming out. It has been described as The Nightingale meets Water for Elephants. Inspired by two true stories, it tells of Noa, a young Dutch girl who has been cast out by her family, and who finds a boxcar of unknown children, taken from their parents by the Nazis too young to know their own names. She takes one of the infants and flees and finds shelter with a German circus that has rescued some Jews. She must learn the aerialist routine in order to fit in from a Jewish trapeze artist in hiding. The question is whether they can save each other or whether their secrets will destroy them both.


Who is your favourite literary character from childhood and why?

Huge fan of Mary Poppins from the P.L. travers books. Those books inspired my desire to travel, which has led to my whole career and life.


Thank you to HarperCollins for the review copy

Posted by Greenacre Writers at 09:41