A Conversation with Sam Blake 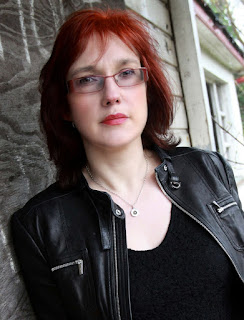 Sam Blake is a pseudonym for Vanessa Fox O'Loughlin, the founder of The Inkwell Group publishing consultancy and the hugely popular national writing resources website Writing.ie. She is Ireland's leading literary scout who has assisted many award winning and bestselling authors to publication. Vanessa has been writing fiction since her husband set sail across the Atlantic for eight weeks and she had an idea for a book.

For fans of Alex Barclay and Niamh O'Connor, Little Bones introduces Detective Cathy Connolly, a bright young heroine set to take the world of crime fiction by storm. The book has been shortlisted for the Bord Gais Energy Irish book awards crime novel of the year award. No.1 Irish bestseller for eight weeks. Bestselling Irish crime debut of 2016.

Twenty-four-year-old Garda Cathy Connolly might be a fearless kick-boxing champion but when she discovers a baby's bones concealed in the hem of a wedding dress, the case becomes personal. 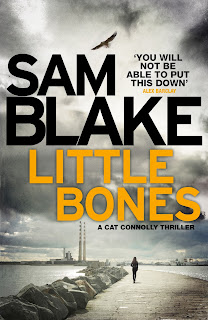 For artist Zoe Grant, the bones are another mysterious twist in her mother's disappearance. Then her grandmother, head of the Grant Valentine department store empire is found dead, and a trail of secrets is uncovered that threatens to shake a dynasty.

In a story that moves from London's East End to the Las Vegas mafia, one thing is certain - for Cat, life will never be the same again. We'd like to thank Sam, for taking part in A Conversation With...and wish her much success with Little Bones, the first of an exciting new crime series.

I started writing in 1999 when my husband went sailing across the Atlantic for 8 weeks and I had an idea for a book – obviously I was convinced it was going to be a bestseller, so I sent it out to everyone everywhere, and it was duly rejected by everyone, everywhere. It really wasn’t great – the opening chapter had no dialogue because I wasn’t confident about writing it, and it focused on a Doctor who was returning to Dublin to commit suicide but who was dead for the entire book. I didn’t know about rewriting then!

Despite being whole heartedly rejected, the bug had bitten and I kept going – by book 3 I was getting better and got interest from a publisher, but after some time working on it, that publisher was taken over by a bigger company who decided not to publish any more fiction in Ireland.

While all this was happening I’d realised I needed to know more about writing. I couldn’t get to workshops or courses because by then I had two small children and my husband worked very irregular hours as a member of the Irish police force, so I decided to organise my own. I had friends who were authors who helped connect me and I’d been working in corporate event management so it was easy to bring those things together. I wanted to hear from bestselling authors and I wanted one day intensive workshops, so I set up Inkwell and it turned out that lots of other people needed those things too!

Inkwell because internationally successful and led me to create Writing; ie – one of Europe’s leading writing resources websites and the world’s only national one – all the time I was learning and making connections and writing myself. Then one day I was having coffee with one of the agents I scout for, Simon Trewin, and we realised that although I’d known him for several years, I’d forgotten to mention that I wrote books too (I sort of assumed he knew) He wanted to see Little Bones immediately and hounded me to send it to him that weekend. It had been in a drawer for a while and I didn’t want to send until I’d read it over again  - in case it was totally awful and I needed to fix any terrible bits –but  thankfully there weren’t any and bizarrely I’d totally forgotten what happened at the end. I’d done what I’m always telling authors to do – put the book away and come back to it, as Jonathan Stroud said in one of my workshops, with a reader’s eyes rather than a writer’s eyes. Thankfully Simon loved it and so did Mark Smith in Bonnier.

I love writing more than anything – I’m on both sides of the publishing fence so I understand lots about the business side, but being able to turn on my headphones, leave my businesses behind and get into a fictional world is the best thing ever. It also gives me huge insight into the writer’s experience – that sounds obvious but understanding being a writer helps me help the writers myself and my team at Inkwell work with.

Totally – she’s in the next Cat Connolly book though, so I can’t say anything about her here!

I’m really interested in characters, their backstories and motivation – what makes them the way they are, so I spent a lot of time getting that right. To understand Tony’s character in Little Bones, I worked out who his parents were, where he’d lived as a child, where he went to school , who his friends were. I needed to know how Boston legal families worked and what impact coming from a half Jewish family would have had on him – and I found a fabulous lawyer in Boston who was writing a thesis on exactly that. I want to feel like my characters are real people who live down the road. Tony’s mother is brilliant – she had to be cut from an early draft though because she wasn’t in the slightest bit part of the story and she kept trying to take over (she’s very bossy!)

I can write anywhere but I need constant interaction to feed my writing mind – I love writing where we holiday every year, in Helford Passage, in Cornwall. There are loads of people coming and going and everyone has a story – as well as that, it’s an idyllic location where my whole family are happy to leave me undisturbed to write as they all have plenty to do!

Rebecca by Daphne du Maurier, it is quite brilliant in every possible way – it’s multi layered, a thriller, a romance, and it has some incredible twists you do NOT see coming.

Just keep writing – the best advice I was every given by author Sarah Webb very early on in my writing life. I’d say too, finish your book and keep writing, rewriting and writing more – it’s the only way you will find your own voice and learn the craft.

I’m currently writing the third book in the Cat Connolly series which is very exciting. I love writing Cat, she feels like one of those best friends you have that live on the other side of the world, so you don’t see them often, but you know them really well.

I love Maria Merryweather in Elizabeth Goudge’s The Little White Horse. It’s a fabulous fairytale of a book that I read when I was very young and can still vividly remember scenes from. I think I’ve always wanted to be her! (I also love Jack Reacher but for different reasons!)

Thank you to Bonnier Zaffre for the review copy.

Posted by Greenacre Writers at 15:56