The Ghosts and Jamal by Bridget Blankley 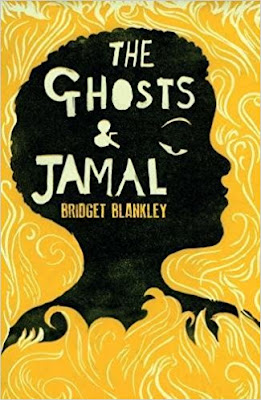 Every muscle in Jamal’s body shakes hard. His head spins; the smell of nutmeg wafting in the air amid the taste of blood in his mouth. Shivering on the ground, he’s lying there exhausted and wait until the spirits leave.

The spirits visit him regularly. Every time they do, it makes Jamal ill. And drives people away. Nobody must touch him nor go near him. He has to live in a hut alone, outside the village compound.

There was too much smoke. It didn’t tickle his nose any more, it was grabbing at his throat, squeezing the air into his stomach in wrenching coughs. He was choking, gasping acid breaths till suddenly his ears were bursting with noise. He fell to the ground, his blanket slipping across his twitching body, hiding his face under the heavy cloth. That was when the pick-up drove past.

Until one day after light he hears no sound but the yellow smoke that has caught him off guard. Then the spirits send him unconscious and the people in the pick-up decide to leave him there.

An orphan’s tale with epilepsy is at the heart of Bridget Blankley’s enthralling tale in The Ghosts and Jamal. Set in Nigeria, it follows Blankley’s protagonist’s quest of making sense of the disorder and ‘the ghosts’ that wipe out his entire tribe. A sole survivor of a gas attack, Jamal’s adventure is harrowing from the onset but heart rendering; his courageous voice is wrapped in bitter sweet experiences throughout.

Blankley wastes no time in dwelling into the social stigma and the social exclusion resulted from epilepsy; through Jamal’s eyes she’s encouraging a sensible narrative in the Young Adult genre that challenges the common perceptions to people living with such a treatable condition. Her sensitive elaborations about disability strike the right cord that go beyond words. Moreover, her well-balanced plot ensures that issues surrounding epilepsy remain the main focus towards the end.

Sometimes they put their hands under the tent and wiped him with cold cloths. Sometimes they put a small stick in his mouth and told him not to bite it. He thought that strange. Only babies bite sticks and he wasn’t a baby. They brought him food and water to drink and sometimes a very small drink in a very small cup. He didn’t like the small drink- it made him very sleepy – but he liked the other things they brought him so he took the small drink when they gave it to him and he didn’t complain.

Her flagging support on the matter carries weight possibly from having Asperger’s Syndrome herself. She’s an old hand in the art of expressing very little about oneself for fear of being judged and misunderstood. Her evocative words echo farther than the walls of the hospital that brings a brief respite to Jamal and the minor characters that colour the man-child in him seeking answers.

Nevertheless, Jamal is unable to stay there for long. The idea that he wouldn’t be able to track ‘the ghosts in the red canister’ once he lives in the confinement of an orphanage sets him up for an escape. Being oblivious to the dangers awaiting him ahead, Jamal plunges himself back to the circumstances he has miraculously escaped from in the first place.

Blankley’s choice of setting is arguably arresting; a Muslim boy caught up in an ongoing violent conflict reverberate the unfortunate reality of millions of children nowadays being in a similar situation in other countries. Particularly their small voices that are usually forgotten in books of the post-colonial genre.

Having grown up in the sixties in Southern Nigeria, Blankley is apt at capturing the discernible beauty of the country’s landscape. Yet her awareness about the tangled mess concerning the tensions between of the north and the south might not be as extensive as her understanding about disability. On the one hand, she has an outstanding impartiality in tackling terrorism. On the other hand, the so-called terrorism that involve a religious-based ideology with a demand of independence for the north is much more than meets the eye.

The latter point is reflected in Jamal’s little comprehension about the attack; his naivety bears empathy but may cloud the message Blankley has wished to convey to the Young Adult readers. By the same token, whilst it’s palpable that children, regardless their faiths, are unfairly displaced because of acts of terrorism, the imposing issue concerning to which side Jamalshould belong is only being discussed in the penultimate chapters.

‘I need to think about what’s right,’ said Jamal.
‘You can think. But you must think here. You have a choice: accept your destiny or go to jail.’
That wasn’t a choice, Jamal thought. That wasn’t a choice at all. This madman wanted him to die and Jamal didn’t want that at all.

Can he make the right decision for himself? There ought to be more than a cliffhanger ending when Jamal’s life seemed to have turned for the better. Do we have to wait for the next book to find out what happens to Jamal?


Thank you Bridget Blankley and Hope Road Publishing for the review copy.