What A Way To Go by Julia Forster 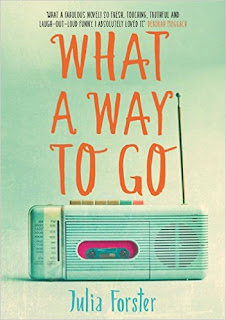 When Harper was five her parents split up. Dad kept Ivy Cottage in the sleepy village of Hardingstone where ‘people walk without aim, as if the footpaths are covered in treacle’. Mum got Harper and the Mini.

Harper is now on the brink of becoming a teenager. She lives with her mum and spends alternate weekends with her dad.  The two worlds she inhabits are very different. The highlight of a weekend with Dad is attending the village fete and winning some of Mrs Curtis’ gooseberry jam or attending the Lone Rangers Disco for one parent families. At Ivy Cottage there is no TV, very little food in the fridge and Harper is encouraged to read interesting books. The friends that she had when she lived there have dropped off the radar over time.

In contrast, life with Mum is much freer. Harper watches as much TV as she wants, reads teenage fiction, speaks her mind and vets prospective stepdads. She spends time with her good friend Cassie and the neighbour’s son Derek, who occasionally ‘babysits’ her when Mum goes out on a date. Meanwhile, Mum’s latest boyfriend, Kit, moves in. The novel follows Harper as she tackles the challenges of growing up and the prospect of boyfriends, while having to fit in with her parents as they expand their own lives and relationships.

Julia Forster has captured the voice of Harper brilliantly. As an only child, dealing not only with her own issues from the divorce, but those of her parents too, Harper has been forced to grow up very quickly, resulting in a level of maturity absent in most twelve year olds. However, there are subtle references that reinforce her true age: After vetting one of her mum’s boyfriends she tells us that she liked Alfonso “because he could make thick pancakes in the shape of gerbils'. Her vulnerability is also apparent when dealing with adult issues. When she discovers her mum’s boyfriend, Kit, has a secret she is unsure whether she should tell her mum and recruits the help of a friend for a second opinion.

Harper is very likeable and not at all the stereotypical whinging, recalcitrant, soon-to-be-teenager. She is well balanced, despite the very different parenting approaches, as both parents make it clear that she is loved – and she knows this.

For most parents there comes a time when they discover their children have interesting conversation and find it a pleasure to sit around the dinner table and listen to their views of the world. This is the case with Harper. She is amusing and engaging. I enjoyed her company.


What A Way To Go is a character driven novel which moves at a good, steady pace. It tells Harper’s story in a moving and sensitive way, packed with humour, wit and insight. References to polka dot clothes, music magazines such as Smash Hits and UCCA forms immerse you in the 1980’s. Julia has done a fantastic job at providing a very entertaining read.

What A Way To Go: Published by Atlantic Books and reviewed by Carol Sampson

Posted by Greenacre Writers at 08:59