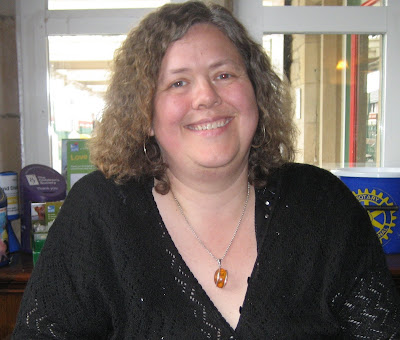 He tried to speak. Although he’d not taken a bite yet, he felt as if his throat was full of bread already, bread that didn’t want to go down. His voice came out dry and squeaky.

He’d been staring at it forever. On the other side there’d been an organised street plan with plots of blurred leopard skin along the edges, like Auntie Jude’s coat. Then, on this side, the usual burnt brown bubbles and wild craters gave way to mysterious swirling mists and creases and scabby as-white-his-knees patches. And right in the middle of his bread was Dad’s face.

Robbie swallowed whatever it was stuck in his throat. His voice emerged clearer the second time. He pointed at the face.

‘What are you on about now?’

It was unmistakably Dad, hair parted to the left, brown-rimmed glasses and the half-laughing expression was right too. It had been five weeks since Robbie had seen him but he hadn’t forgotten.

Mum peered over his shoulder. Robbie had a rush of confusion when she began to pay her full attention to the bread. She snatched up her phone, thumb stabbing at the buttons. He took a tiny bite from the edge of the bread, put it back on the plate, then wondered if he should have done that.

‘Leave the bread. Just eat the curry, babe.’ Mum pulled it away from the dollop of chicken Korma. A splash of sauce followed and landed on his school reading book.

‘No Jude, just Sainsbury’s Naan. Not even the luxury brand. Yeah, bog standard, like you always say. Unless that’s just for toilet rolls.’

Mum, nodding and ‘uhuhing’ at whatever Auntie Jude was saying, turned away from Robbie and placed the bread on the work surface. She tucked the phone under her chin and grabbed the cling film from the top of the cupboard.

‘I’m ringing the paper, definitely. Yeah, yeah, yeah, but this one’s better than all those. Seriously, Jude, you’ve got to see it. I’m looking at it right now. It’s really spooky. Come round. No, I’m sure it’s not Michael Jackson. Ok, see you.’

She stuck the phone in her back pocket, ‘Eat up, Rob.’

Robbie lifted a forkful that hovered in the air above his plate as he looked over at Mum. She reeled a piece of cling film from the roll too fast, cursing as she tried to tear it off. That weird tingly magic, a bit like he sometimes felt pulling his jumper over his head, curled it and stuck it to itself. Robbie got up to help. He was better at this than Mum because it was one job where being in a rush didn’t help. He put his hands out to take it off her but she peeled the cling film off her fingers and waved it onto the floor.

She flipped open, and slammed shut, the cupboards one by one. She pulled out the biscuit tin, tipping the Penguins and Kit Kats out. They slid and raced along the work surface, one yellow Penguin winning by nearly reaching the kettle. She banged three times on the bottom of the tin, shooting out a spray of crumbs from biscuits long ago eaten and forgotten about. Robbie was wondering if any of them were from Dad’s digestives and malted milks when Auntie Jude burst in the front door.

A lady with a camera came early next morning and took lots of pictures. She asked them to point at the bread and look surprised. Auntie Jude wanted to be in the photo as well so they all squashed onto the sofa. Robbie was pleased his Dad was going to be famous. Lots of different people visited the flat. They had more visitors in a day than they usually had in a year. They all wanted to see the bread, now safe inside one of the plastic boxes from Dad’s Christmas chocolates. Robbie could look through the lid and see Dad’s face looking out. His own teeth marks spoilt one side. Mum was talking to a man who was sitting on their sofa, writing quickly into a notebook.

‘I’m a single mother. I lost my husband quite recently.’

Robbie sat by the window. He wondered why, if his Dad was lost somewhere, he didn’t just ask someone the way. And why didn’t Mum go and look for him? The last time he’d seen his Dad had been at that odd smelling place with the thin scratchy carpet. What had it smelt like? Grey meat and something toilety. Maybe Dad was still there, sitting on the saggy sofa with the others, the television on but no sound coming out.

He remembered coming back on the bus, deciding not to think about it anymore. He hadn’t done very well at that but he’d tried. He looked outside. Shame there were no clouds. He loved looking at clouds. It was all blue except for a fading to pale cream on that line beyond the far side of the park. Two startlingly straight trails from an aeroplane bridged the sky. They were cloudy but nothing like real clouds. They soon lost their preciseness, expanding and dispersing into the blue. Soon it was as if they were never there.

Later, a man with a television camera and lots of busy people with phones and clipboards filled the flat. Robbie kept getting in the way, being elbowed out of the way and then getting in the same people’s way all over again. Auntie Jude had repeated the story so often, it had started to sound boring. The story of first seeing the bread had begun to sound like lines from a song they had sung over and over till they’d forgotten what the words meant.

‘It was just an ordinary packet of Naan bread, nothing special. From the big Sainsbury’s. I nearly bought poppadums instead.’

They’d stopped mentioning Robbie, which seemed strange since it was his bread and his Dad. His part had been taken over by Auntie Jude. New people were coming to the flat every day, some of them camping in the park. He heard them singing at night. They came to the door and asked to see the bread. There was so much talking in the flat since they’d found it that he hardly ever had a long sleep anymore, just snatches here and there. His head felt as if it was full of clouds and his eyes itched. Auntie Jude seemed to have moved in. Some of her clothes were hung in Robbie’s wardrobe and she spent a long time in the bathroom.

Robbie got up in the night and wandered into the kitchen where Mum and Auntie Jude were still up and chatting.

‘I can’t tell Rob the truth.’ Mum was saying, sipping her hot chocolate, ‘I just let him think he’s gone away. Whatever’s gone on between us, I don’t want Rob thinking Jack …’ she stopped when she saw Robbie at the door.

‘All right, babe? We thought you were asleep. Want my marshmallows?’

Another film crew arrived the next day, just as Robbie was coming in from school. He let them in and knew from their accents they were from America. He could hear Auntie Jude talking in the living room.

‘And when people stop paying for pictures and interviews we could sell it on ebay. How much do you reckon we’d get?’ then, when she noticed the film crew she pasted a big grin on her face and said ‘Hi’.

There seemed to be even more people in the flat now, as the story was told yet again. Robbie decided to keep out of the way and walked outside. He crossed the road to the park, looking both ways like Dad always told him. He walked into the playground, climbed the ladder of the slide and sat in the puddle at the top. He didn’t care that the water seeped into his jeans. He looked up.

Several bulging white-topped mountains had built up. He couldn’t help staring out at them and their random, ever-changing patterns. They were moving fast today, changing shape and, in front of them, greyer, thinner clouds travelled across pretending to be smoke.

He’d watched them from his classroom window all morning. They had distracted him from his maths. Mr. Crosby said ‘wakey, wakey, Robbie!’ in that somewhere between singing and teasing voice of his. Robbie knew they all laughed because they felt glad they weren’t getting it this time. He shook his head because he didn’t want to remember the time Mr. Crosby told him to pull his socks up and he did pull his socks up. He’d felt sick when the whole class laughed at how stupid he was. That made him feel like he might as well start acting stupid to prove them all right.

Robbie heard voices. Everyone was coming outside and crossing over to the park. The clouds continued their performance of shifting, expanding and swelling up further. He stretched out a hand, a small part of his brain believing maybe he could reach one this time, pull it down and use it for a pillow, pour strawberry sauce over it or float it in an enormous mug of hot chocolate for Mum. At the same time he knew this was impossible.

He glanced back at Mum and Auntie Jude, surrounded by the film crew and all the visitors and the people hanging around in the park. In the second that he‘d looked away from the clouds something had changed. None of the others had noticed what he was looking at. The biggest cloud Robbie had ever seen appeared to fill the whole of the sky and right in the centre Dad’s face, just like on the bread, slowly flowed into focus.