Eric Ebner lives quietly in a yellow-wood villa at Skrea beach in Falkenberg, a west coast town in Sweden. His job is as an embalmer, he treats dead bodies in the precise manner and the discipline of his training. A child’s cadaver is a bonus, which doesn’t come often. He lays Antoine’s on the table, being giddy with excitement as his scalpel pushes beneath the cold but supple skin of the torso... 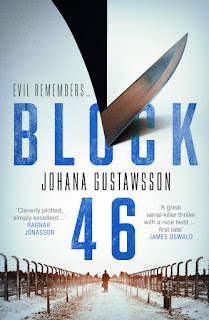 In the nearby Olofsbo – in another era- Emily Roy studies the area where a female body had been concealed under an abandoned boat. Identified as Linnéa Blix, she was reported missing a day before in London. Roy was then called to see it because of the distinctive wounds: they match with what she’s seen on three children’s bodies -two buried, one exposed- in Hampstead Heath. Except Blix’s murder breaks the pattern: why her? What’s the anomaly for? She’s mulling over the questions while making the following mental note.

Latex-gloved hands pull the boat away. Beneath it, the body is naked, the skin blue, with a thin film of frost. Emily can’t smell the rancid scent of death, which has been blown away by the cold. The silky blonde hair frames the face, all the way down to the shoulders. The arms have been placed alongside the body. The pubis is shaven. The eye sockets are empty, black, dried blood highlighting their circles. The incision made to enucleate the victim is visible and tidy. The throat is cut wide open. The gash is deep, flaps of sin hanging on both sides of it. The trachea has been sectioned and pulled out.

Between Sweden and England, between the ghostly shadows of Buchenwald Concentration Camp and the present day, between a serial killer and a police profiler emerge a complicated plot that is gripping and worth perusing on every page.

Johana Gustawsson’s seven-year wait for the publication of her debut crime fiction is remarkable. The audacious Block 46 is the fruit of her painstaking research leafing through the documents of the Nuremberg Trial. Spanning over seventy years, it is a tale with an array of settings and flashbacks being approached differently in the génre.

Published in French in 2015, the English translation by Maxim Jakubowski, is competent and has a touch of the literary novel. The harrowing depictions of the killings can be horrifying to many, for Gustawsson is visual about gruesome details. Nonetheless, her narratives are evocative and audacious. From the organised hell of the camp to the hunting of the victims, she depicts different scenes succinctly but with great sensitivity. Her timing of events denoting distinctive places and time might take a moment of getting used to and yet her offer of a piece of the jigsaw clue engages readers during the journey to the solution. She allows readers to follow her characters closely and being in awe with the development of the case. Even in the penultimate ending she still leaves a room to wonder, to speculate.

Gustawsson pushes further with the involvement of Blix’s friend the French Alexis Castells in the investigation. It is as if it’s been the writer herself in her portrayal of Castells, whom has become Roy’s sidekick. If Roy is meticulous and exact, the other lets her mind meander to unthinkable scenarios and possibilities.

In a show-stopper pace Gustawsson juggles a lot of balls; there are moments that she almost drops them in the subplots. Nonetheless, she’s an old hand in throwing off the scent with her wild goose chase. She might give away the fact that Blix knew her killer well, but on the other hand she's managed to keep her wild card intact.

It’s inevitable to notice that the underlying issue is a matter that’s been dear to her. Her grandfather, Simon Lagunas, was on the resistance group that took over the camp from the SS soldiers before the US army went in on 11th April 1945. Her personal link shows the braveness and the perseverance that makes Block 46 an endearing tribute to the survivors of Buchenwald.

He wraps gauze around the sockets and the opening he has carved into the child’s neck. With an antiseptic cloth, he cleans the forehead, the nose and the marbled cheeks. Then the shoulders, the torso and the navel, on which he delicately places a cotton pad to absorb the blood. He throws the soaked pad away and completes his cleaning with a small, thin towel that he has rolled round his fingers. He uses it to delve into the depths of the ears, to wipe the sides of the nose and the skin on the child’s stomach.

How many knitted eyebrows, or even a wince at the above paragraph happen? Is it necessary to explain how a sociopath does ‘the work’? If anything, Gustawsson’s tenacity to plough through tough scenes is applaudable.

If there’s a slight displeasure, it’s the fixing of the genders of the hunt and the hunted. Although it’s quite a fair choice on her part, given the history of the crimes along with some attitudes to gender roles Gustawsson is willing to discuss.

As Roy and Castells close in on the murderer, are they close to catching the perpetrator? Or in fact, are they being lured into a trap and falling into it?

At last, a great fanfare concludes. Is Eric Ebner, an ex-prisoner of Buchenwald, the murderer the police have been looking for?

Thanks to Orenda books for the review copy.