A Conversation with Sheena Kamal 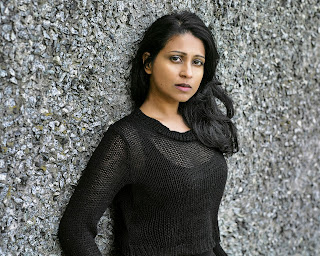 Sheena Kamal has been a stunt double (for children), a stand-in (most notably Archie Panjabi) and a film/TV extra. She has been a producer’s assistant and most recently, a researcher for a gritty TV crime drama series set in Toronto. Eyes Like Mine is inspired by one issue that kept cropping up during her research- the plight of the missing and murdered indigenous women in Canada: The Highway of Tears.
Sheena holds an HBA in Political Science from the University of Toronto, which she attended on Canada's most prestigious scholarship and was awarded a TD Canada Trust scholarship for community leadership and activism around the issue of homelessness. 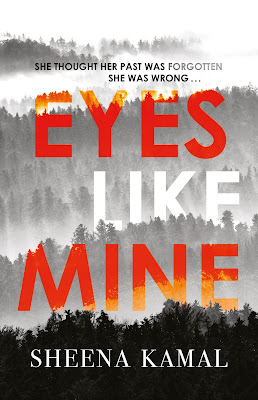 The phone rings.
The man on the other end says his daughter is missing.
Your daughter.
The baby you gave away over fifteen years ago.

PI Nora Watts isn't sure that she wants to get involved. Troubled, messed up, and with more than enough problems of her own, Nora doesn't want to revisit the past.

But going in search of her daughter brings Nora into contact with a past that she would rather forget, a past that she has worked hard to put behind her, but which is always there, waiting for her - in a syringe, in a bottle..

"Kamal has come up with an unusual and engaging character that is uniquely her own. Nora carries a plot which could veer into unbelievably with panache and there's a page-turning thrilling element to the narrative. This could be my book of the year and it's only January."
- Sarah Ward, author of Crime Pieces

In Eyes Like Mine, Sheena Kamal has created a kick-ass protagonist who will give Lisbeth Salander a run for her money. Intuitive, not always likeable, and deeply flawed, Nora Watts is a new heroine for our time. We'd like to thank Sheena, for A Conversation With... it's great to see the plight of the missing indigenous women in Canada highlighted, and wish Sheena much success in the future.

Books have always been my best friend. Sad, I know, but that’s the truth of it. I love books. I’ve always wanted to write one, but I figured it was for People With Something To Say.

After university, I went into acting and, through that, became very interested in writing for screen. I tried to do that for a long time but the film and television industry is tough to break into. In the end, I was tired of putting myself out there and feeling stomped on. I’m short enough as it is.

I had an idea for a novel that was in its gestation stage when a crime writer friend of mine hired me, as an actor, to read his manuscript to him. Suddenly, I could see the path in front of me. I knew I could do it, somehow. I had this absurd conviction that I deliberately chose not to look too closely at. I dropped everything and moved to Vancouver to write the novel. When I was finished, I went to Thrillerfest in New York and pitched to agents. Eyes Like Mine is what came from it all.

I think the world has gone mad and the only thing that makes it better is stories. Writing is deeply personal for me. I write in attempt to understand places that inspire me, to see people in a new way, to unleash my imagination. What I love about it is that I get to follow my curiosity and sometimes the connections my mind makes truly excite me. I love the spark of creation.

Yes! When I was trying to be an actor, the first thing I learned was that I had to lose ten pounds. The second was that it’s essential to back the character you’re playing. Nobody sees themselves as a villain or a terrible person. I always try to bring this lesson to my work. I empathise with all my characters, even the ones I would cross the street on a sunny day to avoid. One of the more interesting ones for me is Nora’s sister, who hates her. I understand her motivations very well, though, and see a lot of myself in her.

I write the world as I see it and people my stories with characters that I see around me. It’s as simple as that. I lucked out in my childhood. I grew up in one of the most multicultural parts of Toronto, Canada, which is one of the most multicultural cities in the world. Diversity is everyday life for me and I never twice about including someone with a background or identity that isn’t well represented in literature, or different from mine. Chances are I will have gone to school with that guy and he made me do all the work on group projects.

That being said, writing specifically about a cultural experience that’s not my own requires some thought. I don’t come lightly to the page in those circumstances—but I still come to the page.

Somewhere tropical, where I can watch the sun come up over the water as I write. I know for a fact that this is the best me. Plus, I’m not a huge fan of wearing pants (American) so I prefer to be in an environment where I don’t have to. I was born in the Caribbean so it makes sense that I work best in warm weather.

The Golden Compass by Philip Pullman, which I read as an adult. It’s an incredible book—and it has polar bears! There’s so much in the His Dark Materials series to hold onto, but I like to think of Lyra with her alethiometer and how it only works when she is holding something in her mind without thinking directly about it. That’s how I see the act of creation. I think of her alethiometer often and wish I came up with the idea.

I’m not sure I can give advice because I don’t have anything figured out at this point. Maybe in a few years I’ll have some definitive impressions of the whole shebang to share with people. In the meantime, I’m just trying to muddle through it all myself.

What are you currently working on? What can we look forward to reading?
I just finished the first draft of the sequel to Eyes Like Mine, tentatively titled It All Falls Down. It has been an exercise in self-flagellation—but I did enjoy writing it, too. Maybe I like self-flagellation?

You can help me figure out if it was worth it when the book comes out in 2018.

Bilbo Baggins from The Hobbit, because I think we could be friends. I feel like he understands what it’s like to be a small person in a large world. We’re both fond of breakfast. Also, he went on an adventure and, honestly, I love adventures. I’m on one right now.