Wait for me, Jack by Addison Jones

Wait for me, Jack is the latest novel by Addison Jones which follows Milly and Jack through a sixty year span of their marriage. 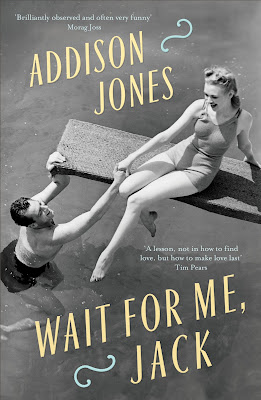 We first meet them (then known as Billie and Jacko) in 1950 living and working in San Francisco, both looking for excitement and adventure; both looking for a better life than that of their parents.

Billie at 21 has left behind her life in the valley and “can almost see the bridge she’s burned. She can smell it. A thrilling, charred smell.” She is working as a secretary at Perkins Petroleum Products and meets Jacko on his first day there as a copywriter.

Jacko – “His dad was Jack; he is not, and never will be” – doesn’t like anything about his work, or the people, at Perkins Petroleum. At 24 he cannot see himself stuck in a dead end job for years on end and considers not returning after lunch. He does return and is introduced to Billie.

She thinks he is cocky and “reminds her a little of James Dean” and Jacko finds Billie sexy with hair “just like Marilyn Monroe”.

Desperate to better himself and, with clear aspirations for his future, Jacko has no desire to date any girl from the valleys. When, at the end of the working day, he asks Billie out to dinner he detects “something unpleasantly familiar” about her and cannot work out quite what it is but after some reflection on her appearance and clothing, convinces himself there is nothing wrong with her.

Billie declines Jacko’s offer of dinner, then changes her mind. The initial attraction between these two young people, desperate to escape their simple upbringing, is strong. Life for them is unpredictable, exciting and full of promises.
The story then catapults to 2014. Somewhere along the way Billie has become Milly and Jacko is now Jack. They are dealing with the challenges that inevitably come with old age, where illness and senility has slowly crept up on them. They are now well into their 80’s where they muddle along through the day, each irritated by the other.

Jack had “been in a bad mood for so long, he couldn’t remember not wanting to strangle his wife,’ and Milly knew “her husband was so lazy, so selfish”. Despite this, they both knew they loved each other.

By the end of the second chapter I was captivated and already felt I knew Jack and Milly. I could not wait to find out what had happened in the intervening years, taking them from the first flush of love to the descent of old age.
The story works backwards from 2014, told from both Milly’s and Jack’s perspective, to when they first met in 1950.  I wondered the reasoning for not working forward chronologically but as the story progressed I found it fascinating to see who they were before discovering some time later the events that had defined their characters. The story follows their joys and the disappointments and how their characters change in response to these experiences.

Addison Jones has told the story with sensitivity and understanding along with some thoughtful insights, such as Jack’s selfish realisation that very few would miss him when he was gone and Milly’s more pragmatic view that marriage requires a lot of hours.

There is humour too. Jack refers to Milly’s sightings of imaginary people in the house as “urinary infection hallucinations” and makes the observation that “those pillow lines used to last a minute – now sometimes she kept them till lunch”.

There is a lovely descriptive piece when jack sums up his life so far – now in his early 40’s - in an imaginary abstract painting, revealing his emotions. “black smudges, grey at the edges” when his dad and Glen Miller died. College – an exciting time with wonderful new experiences - were “an alizarin crimson explosion, running vertically right off the canvas. Yards and yards of Lizbeth’s breasts”. There are many superbly written pieces throughout the novel.

Jones has skilfully conveyed how life drifts from one experience to the next, changing us along the way. It shows the reality of life and the love that often runs so deep that it may appear non-existent but is still there, humming in the background. The story also shows that despite being married and having a family there are times when loneliness can be acute.

Wait for me, Jack is a very entertaining and thought provoking novel which many will find resonates, in part at least, with their own lives. It explores the roles each partner plays in the family unit in an effort to keep it whole and the sacrifices and selfishness that are individual to each.
A very enjoyable read.


Thank you to Sandstone Press for the review copy

Posted by Greenacre Writers at 13:20