A Conversation With Lucy V Hay 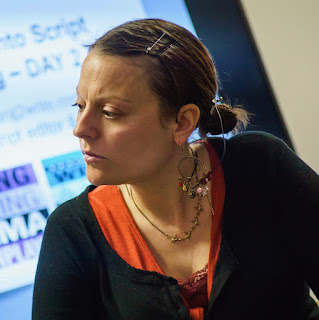 Lucy V. Hay is a novelist, script editor and blogger who helps writers via her Bang2write consultancy. She is the associate producer of Brit Thrillers Deviation (2012) and Assassin (2015), both starring Danny Dyer. Lucy is also head reader for the London Screenwriters’ Festival and has written two non-fiction books, Writing & Selling Thriller Screenplays, plus its follow-up Drama Screenplays. She lives in Devon with her husband, three children, six cats and five African Land Snails. Lucy's debut novel The Other Twin (2017) is published by Orenda Books, and hits the bookshops this August.

When India falls to her death from a bridge over a railway, her sister Poppy returns home to Brighton for the first time in years. Unconvinced by official explanations, Poppy begins her own investigation into India’s death. But the deeper she digs, the closer she comes to uncovering deeply buried secrets. Could Matthew Temple, the boyfriend she abandoned, be involved? And what of his powerful and wealthy parents, and his twin sister, Ana?

'A cracker of a debut...I couldn't put it down' - Paula Daly

Enter the mysterious and ethereal Jenny: the girl Poppy discovers after hacking into India’s laptop. What exactly is she hiding, and what did India find out about her? 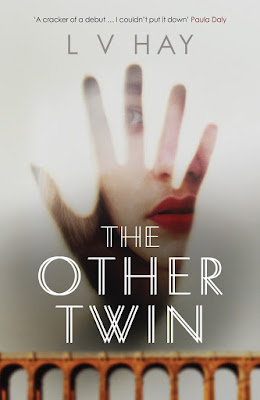 Taking the reader on a breathless ride through the winding lanes of Brighton, into its vibrant party scene and inside the homes of its well-heeled families, The Other Twin is a startling and up-to-the- minute thriller about the social-media world, where resentments and accusations are played out online, where identities are made and remade, and where there is no such thing as the truth...

We'd like to thank Lucy for having A Conversation...and wish her much luck and success with her debut novel, The Other Twin.

Like many writers, my journey started in childhood. My Mum is a voracious reader and back then had a big bookcase at the top of the stairs. I used to look at the books in and see the names and daydream about having my name on the front. It was always my intention to write a novel, but I got distracted, first when I became a teenage mother, then by university as I ended up studying screenwriting for film and television.

I love screenplays, but discovered what I really enjoyed in that world was pulling them apart and breaking them down, especially in terms structure, plotting and characterisation. I ended up becoming a script editor for movies on this basis, but I still hankered after writing something myself.

So I ended up writing my first novel, a YA story called The Decision: Lizzie's Story, which confronts a teenage protagonist with ALL the possible outcomes of a single dilemma. I wrote a follow up, then several non-fiction titles on screenwriting for Kamera Books. But I’ve always loved crime, so thought I would have a bash!

Now I’m delighted to say I’ve a book coming out with the mighty Orenda Books, called The Other Twin. It’s a crime mystery set in Brighton and protagonist Poppy is determined to prove her younger sister India did not kill herself … This journey takes her into the shady online world of blogs and social media, as well as the LGBT landscape of the city.

I think as a writer, I am principally a communicator of new ideas. I love the idea that my books or stories can help audiences consider an alternative view. I am realistic – a single book, film or blog is unlikely to completely turn someone’s worldview upside down – but I can do my part in being part of that cumulative build up.

Absolutely. There is a character in The Other Twin, who is both homophobic and misogynist. That was tough to write. It made me feel very uncomfortable, guilty and even angry, to think up the various things someone like him would think or say to other people. But no antagonist thinks they’re a ‘bad’ guy – villains are the hero of their own story. So I had to delve deep and work out why he would be like this. Once I had traced back what had caused him to have this reaction, I didn’t condone him – obviously not – but I could see what had twisted him to be like this.

B2W quickly became known for writing about and championing diversity in characterisation and storytelling generally. I’ve written a new non fiction book called Writing Diverse Characters for Fiction, TV and Film for Kamera Books again, which is out this September (2017).

I’ve also attempted to take my own advice in The Other Twin: setting it within the LGBT community was deliberate, as was including an interracial family. The LGBT community is one that has always welcomed me from a young age and one I feel confident within, but another element that recurs in the story is one black character’s natural hair. Being white I had to obviously do a lot of research on this, as I was very anxious not to get it wrong. The politics of ‘natural vs relaxed’ hair can be a real minefield and I didn’t want to fall into the usual white writer traps of calling natural hair ‘unruly’ or suggest it’s anything other than beautiful, which I think it is.

I stayed in a holiday cottage in Lynmouth, Devon one year that had a fabulous big living room with oak flooring and a balcony that overlooked the harbour. You could see right across the sea to Wales. I’d write there every day if I could.

I don’t think there is any one book I wish I’d written, though I admire plenty of them and am in awe of the talent and bravery. I do hope I could one day write a memoir as honest and insightful as Maya Angelou’s I Know Why The Caged Bird Sings. She was a huge inspiration to me as a fellow teen mum and made me want to find out so much about the world. Another book that had a similar effect on me was Chinua Achebe’s Things Fall Apart.

As I always say on my website, my advice is three-fold:

Know your concept, inside out. Too many stories – whether script or novel – ‘misfire’ at foundation level, they’re not really sure what they’re about; who is in them; or why;
Have a strategy. Know what you’re trying to do, plus why and when by (the last bit is what always gets forgotten!); Finally, understand it’s not about a destination. Your journey as a writer will never be over. So have fun!! Or go and be an accountant J

I’m currently working on my next book for Orenda. I love to write about dysfunctional families, sociopaths and modern things like social media, apps or other tech, so expect the next book to have some – if not all! – of these things in.

Got to be Matilda by Roald Dahl. I was a lonely, precocious child who loved books just like her. I would try and move stuff with my mind too, but unfortunately it never worked! I did have a vile teacher like Miss Trunchball though and when I was about seven I prayed that she would die … and she got run over! By a tractor! Luckily she didn’t die, but the evidence is clear. Don’t mess with me !!

The Other Twin is published by Orenda.