The winning entries will win cash prizes and will be published on this blog and our website and in the second Greenacre Writers Anthology.

About the judge: Paolo Hewitt is a former journalist and author of over 20 books. He has written for Melody Maker and NME, and The Sunday Times. Among other books, he is author of The Jam: A Beat Concerto, The Small Faces: The Young Mod’s Forgotten Story, Getting High: The Adventure of Oasis, and Alan McGee and the Story of Creation Records. His two excursions into fiction include the novels, Heaven's Promise and The Mumper which was recently made into the film, Outside Bet. His highly acclaimed autobiography, The Looked After Kid brilliantly chronicles his time growing up in the care system.

Entries may be made by post: e-mail greenacrewriters@gmail.com for entry form or enter online:  Here

Ways into Creative Writing - afterword from the last workshop

Two days after the last Greenacre Writers workshop, we are left with some vibrant images from the writing that was produced. In our book that means the quality of writing was good. Many participants had done relatively little writing and some claimed none at all. One felt quite intimidated by the other writers in the workshop and thought her attempt rubbish, but by the end of the session and after the last exercise, Secret Treasure, she realised that she too could write good stuff.

The three exercises we set required the writers to write - no planning, no editing but to just get words down. What stood out most for us were the emotions and the visual images the writers conveyed: a child admiring her new shiny shoes, and her devastation of finding them spoiled after she had played heedlessly in the garden. The tender appreciation of an adult for her old teddy bear who has watched over her throughout the ups and downs of life; the delight of a child when allowed to play with the bright shiny jewels in her mother’s treasure box, the tragic desolation of a young woman who cannot cope with her depression. 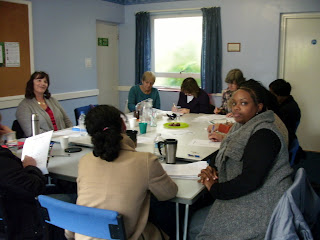 Each of the writers brought something special to the workshop, not least our youngest writer. The observations of Smokey the cat, were brought vividly to life by her owner, 8 year old Summer who attended with her mother. 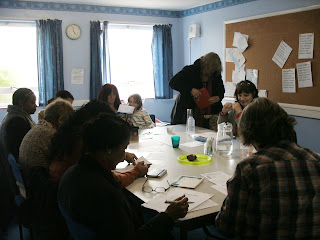 We hope the writers enjoyed the workshop as much as we enjoyed running it and that it will encourage our 11 writers, aged between 8 and 80, to keep putting pen to paper. After all, there is a short story competition coming up very soon!

'Thank you Lindsay and Rosie for a great and productive afternoon - I am finally sitting down to write! Also, thank you for your patience and kindness to Summer. She said that she did not feel very confident when she first sat down, but after Lindsay said such positive things about her story, she felt "VERY CONFIDENT, MUM" and chatted about it all the way home.'