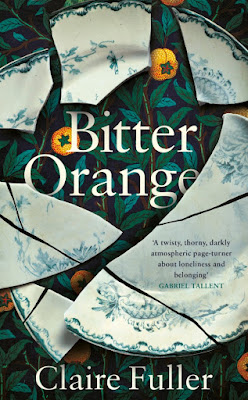 When Frances is offered the job of surveying the follies and garden buildings of an old English country house, she is keen to see the neo-classical architecture with the possibility of finding an elegant Palladian bridge. Her mother has just died and she is ready to escape the city and take on the challenge. From America, the new owner arranges for her to stay in the crumbling mansion.

The owner has also commissioned someone to report to him on the condition of the house and its fittings. Frances is expecting to see an older man joining her in the house. But when she meets the glamorous Cara and the handsome Peter living in the rooms below her, she is taken aback. This couple are young and full of life; confident, self-indulgent and pleasure loving.

The memory of my first sight of Cara stirs me: a pale, long-legged sprite. I hear her shouting outside on Lyntons’ carriage turn.

Frances is nearly forty years old. All her life she has toed the line and followed a routine.

I knew, of course, right from wrong. My father, Luther Jellico, had instilled it into me before he left and then mother had continued in her way: payment will always be due for any wrongdoing, don’t lie or steal, don’t talk to strange men, don’t speak unless spoken to, don’t look your mother in the eye, don’t drink, don’t smoke, don’t expect anything from life.

Frances does not have many friends and is used to people walking past her. But to her surprise, the couple wants to befriend her, cook for her and spend every day with her. At first, she shies away from them. But soon, she is pulled in by the eccentric Cara, who fascinates her even as she listens to her strange stories. And by Peter who seems to want to confide in her.

Something is not right, and Frances cannot work it out. When she finds a peep-hole under her bathroom floorboard, she cannot resist spying on them. She knows it is wrong, but she gets swept away by their company; living decadently and dangerously. Not much report writing gets done by any of them.

The weekend passed without us noticing it was the weekend. We ate and we drank and we smoked.

One person does try to pull her back from the brink of disaster. Victor, the local vicar visits her at Lyntons and feels the need to advise her.

As I said yesterday, I don’t think this is a good place for you. I think you should leave. Go back to London, or somewhere else.

Many years later, Victor is still trying to save her.

Victor tenses, hopeful for a net that he can use to save me. A child’s net on a stick that he can thrust into the rushing water where I spin and turn in the eddies. He would scoop me out if he could. But there’s nothing now that will stop me flowing downstream with the current.

Frances is now too involved in the lives of her two companions. She is addicted to them. and cannot extricate herself from her part in the unfolding events. Events that escalate to such a shocking ending that none of them comes away unscathed.

There are detailed descriptions of the house and garden in this book which make the place come alive on the pages. The feelings and thoughts of the characters are also extremely well written. The year is 1969, and there are many references to British life in that period which help the reader picture everything from the clothes, to music to food. The history of old English mansions is well researched, as is the artistry of famous painters and sculptors.

This is a twisting and winding tale of love, self-doubt, desire and danger, all written in a simple, easy-read style. It is a compelling read which will leave the readers wishing for more.

Posted by Rosie Longstocking at 07:41 0 comments