A Conversation with Nikesh Shukla 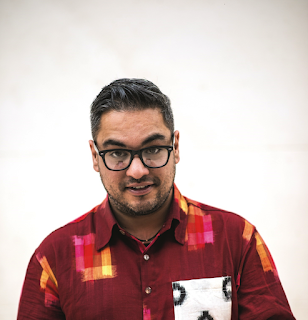 Nikesh Shukla is the author of the critically acclaimed novel Meatspace, which according to The Guardian, captures a cultural moment, 'Like Douglas Coupland's Generation X'. 'Buzzing with streetwise smarts and satirical barbs, it's a thoughtful, often hilarious, meditation on a young writer's loneliness in the digital age.' Independent on Sunday.

His debut novel, Coconut Unlimited was shortlisted for the Costa First Novel Award 2010 and longlisted for the Desmond Elliott Prize 2011. Metro described it as '…a riot of cringeworthy moments made real by Shukla’s beautifully observed characters and talent for teen banter'. In 2011, Nikesh co-wrote a non-fiction essay about the riots with Kieran Yates called Generation Vexed: What the Riots Don't Tell Us About Our Nation's Youth. In 2013, he released a novella about food, called The Time Machine, donating all his proceeds to Roy Castle Lung Cancer Foundation. This won Best Novella at the Sabotage Awards. He also wrote the short film Two Dosas and the Channel 4 sitcom Kabadasses. 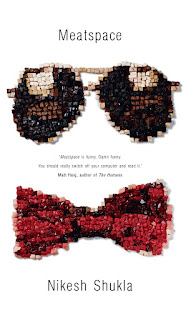 We're so pleased that Nikesh agreed to be interviewed and especially at such short notice, and all so that we could include him in #diverseauthorday. We think you'll agree that his answers are not just interesting but funny too. And we're lucky to have caught him before he dashes off to be a stand-up comic!


1. Tell us of your journey as a writer

Well, I spent much of my twenties avoiding spending the amount of time you should spend writing to get good at it because I was trying to be a rapper. I was in a bunch of bands, I rapped above pubs, outside record shops, made bland political statements and I was okay. I was just okay. So when the realisation that I was only ever going to be okay set in, I turned my attention to writing. I started with a bunch of short stories with a loose narrative, thought I was a genius because it was the first thing I’d ever properly written. I then wrote something else, was gutted that its genius wasn’t recognised, and then I sat down to write Coconut Unlimited, which I knew I loved, instantly, and I knew it would get published, and I knew it was an important book for me, because it was easy to write. Not that there weren’t difficult times, but because I had the resilience to bash through those difficult times. And then, after a lot of rejection and persistence, and weird comments (see this blog here: http://www.writerscentrenorwich.org.uk/nationalconversationfourexamplesofdiversityinpublishingbynikeshshukla.aspx) it eventually got published, and now I can’t stop, won’t stop.

It’s frivolous. What I’m doing isn’t important in any way other than I’m providing, I hope, entertainment to readers. I’m not writing stone cold classics. I’m not answering the important questions of our time (although I do ask questions important to me in all of my work). I’m doing it because I enjoy writing and I enjoy reading. I enjoy making people laugh and laugh and I enjoy the ability to tell them an emotional story that they laugh all the way through until the end when I give them something poignant to hold on to. And that’s not clever or big or intellectual or important, it’s frivolous. The most important thing I do is, as a brown author who doesn’t write frangipani literature with all the tropes and stereotypes people have come to expect of South Asian authors, I exist. I am here. And I defy the stereotypes of what is expected of authors from the South Asian Diaspora. And because I do that simply by being alive, that’s good enough for me.

Yes. Aziz in Meatspace is a horrendous person. He’s the embodiment of the douche bro culture online, like the utterly morally bereft idiot men pulling pranks on YouTube or railing against women in comments or being all high five-y about sports on Saturdays on Twitter. That’s him, really. He’s the embodiment of all that. But he’s also fearless and funny and fun and I like his voice. I’d probably be friends with him but wonder why a lot.

The window box in the Pervasive Media Studio in the Watershed where I work for my dayjob. I edit a magazine there. The window box is a little table encased in light, and it hides away from the rest of the studio. I do a lot of thinking there.

The book I’m writing now. I wrote two novels avoiding writing this one, because it’s so personal, which is a joke because people tend to assume my work’s really autobiographical. I’m writing it now because I’m ready to feel good enough to write it.

6. What advice do you have for would be novelists?

The abundance of writing tips out there should tell you one thing. No one knows anything. If they did, there would only be one book of writing tips. Find the writing tips that work for you. Find the schedule that works for you. But remember, regularity is key, and if regularity, for you, means writing in the same slot every day/week, bloody do it, mate.

A book for teens, two television projects, a film project, another film project, my next book for adults, and an instructional guide for my daughter about life.

Family Life by Akhil Sharma. It’s wonderful. It deals with the immigrant experience, alcoholism, depression and being a carer in a family with someone with a disability so well. It’s weird, funny, strange, concise and utterly emotionally destroying. It’s brilliant.