A Conversation with Caitlin Davies 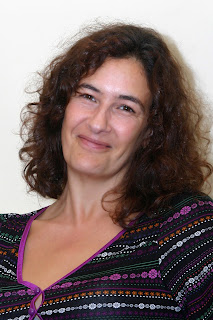 Caitlin Davies was born in London in 1964. She wanted to be a writer from a young age. Both her parents are writers, but her mother in particular doesn’t think there is such a thing as a ‘writing gene’.

Whilst living in Botswana, Caitlin worked for Botswana’s first tabloid newspaper, The Voice. One of her earliest stories was tracking down a talking hippo. Caitlin said, 'The only problem was, I was so scared when I found it that I forgot to ask it a question.' She also worked as editor of The Okavango Observer, and won a Journalist of the Year Award, but the paper closed down shortly after she was arrested for ‘causing fear and alarm’. After 12 years in Botswana Caitlin returned to the UK.

Caitlin is the author of five novels, including The Ghost of Lily Painter (2011), which is is based in part on a true story - two Edwardian baby farmers who were hanged at Holloway Prison in
1903, you can read more about that here. Four books are set in Botswana: Jamestown Blues, (1996) a coming of age story about a girl growing up in a salt mine, The Return of El Negro, (2003) the true story of the body of a southern African man stolen from a grave in 1830 by two French naturalists, Place of Reeds, (2006) a memoir, and Black Mulberries, (2008) a tale of two feuding families during the birth of Moremi Game Reserve in the 1960s.


In the UK Caitlin has written for The Independent for several years, and her work has appeared in a variety of publications including: The Sunday Times, The Telegraph, Sunday Express, Mail on Sunday, Daily Mail. She has also written five non-fiction books, and several short stories. Caitlin is currently working as Royal Literary Fund Fellow at the University of Westminster.

It's wonderful that Caitlin is shining a light on forgotten women's histories. We wish her the best of luck with the new books and look forward to reading her next novel which she is currently writing.

It’s been quite a long journey…The first time I sent off a piece of writing for someone else to read was when I entered a Sunday Times short story competition at the age of 11. That was 40 years ago. I didn’t win but I got ‘commended’, which I tried to take as encouragement, even though I was gutted at the time.

It wasn’t until I was in my 20s that I had my first book published and naively I thought things would then get easier. But with every book you’re starting from scratch, trying to convince other people it’s brilliant. I’ve now had 10 books published – 5 novels and 5 non-fiction books – although there are a fair number of other books that have been lost along the way.

I don’t think I’ve ever thought of having a role as a writer, but I like to entertain, to take people to another world, to tell a story that I don’t think has been told before. I particularly love uncovering the lost tales of women, whether Edwardian baby farmers or champion Victorian swimmers. The best thing is when someone says they missed their stop on the tube because they were so busy reading my book. You can’t get better than that.

Hmm, interesting question. No, I don’t think I have. But if I dislike a character that can be enjoyable in itself, especially if they get their comeuppance…

My first few books were set in Botswana so it seemed obvious to me that most of the characters would be black, while my first published novel was told from the perspective of a young mixed race girl. But getting these books published was hard. The Botswana publishing industry was tiny; I had a couple of near misses with South African publishers, and was eventually published in the UK.

But UK editors made it clear that they wanted central white characters, this was ‘more commercially viable’, and one even asked me ‘do black people read?’ How on earth are you supposed to respond to a question like that? I was told that my negative white characters were ‘stereotypes’ even though they were not. I don’t think it’s a coincidence that the first book (a memoir) that did really well had a central white character (i.e. me). That’s pretty depressing isn’t it?

More recently I wrote a novel about four childhood friends, the cover image showed four white women and when I pointed out one was black I was told ‘don’t worry, we’ll Photoshop and colour one of them in.’ I had a hard time trying to get the publishers to see how outrageous this was.

The literature that is published certainly doesn’t! Nor does cinema. All children must grow up seeing themselves in stories.

Right now I’d be happy to be transported to Margate, the novel I’ve just finished opens in Margate in 1862 and the coastal landscape is stunning. I’d swim in the Walpole Bay tidal sea pool every morning, write the rest of the day, and have lashings of seafood and wine in the evening.

Develop a THICK impenetrable skin. Writing is very subjective, what some people love others hate so don’t take rejection too personally. Easier said than done! Keep going, enjoy it. Read a huge variety of books, try and pin point what you like/dislike about them and use that to drive you on. Also, get a ‘real’ job to pay the bills in the meantime.

Two things. A novel about a ‘champion lady swimmer of the world’, based on the careers of several women in Victorian times who were once incredibly famous and who are largely unheard of today. And a history of Holloway Prison in London, using biographies of prisoners and staff to tell a 150-year history of women, crime and punishment in the UK.