A Conversation with Elle Wild 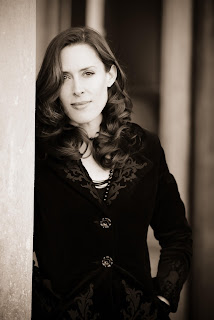 Elle Wild grew up in a dark, rambling farmhouse in the wilds of Canada where there was nothing to do but read Edgar Allan Poe and watch PBS mysteries. She is an award-winning short filmmaker and the former writer/host of the radio program Wide Awake on CBC Radio One. Her short fiction has been published in Ellery Queen Magazine and her articles have appeared in The Toronto Star, Georgia Straight, and Westender. Wild’s debut novel, Strange Things Done, won the Arthur Ellis Award 2015 for Best Unpublished First Crime Novel, and was shortlisted in multiple contests internationally. Recently returned from the U.K., Wild currently resides on an island in the Salish Sea named after the bones of dead whales.

As winter closes in and the roads snow over in Dawson City, Yukon, newly arrived journalist Jo Silver investigates the dubious suicide of a local politician and quickly discovers that not everything in the sleepy tourist town is what it seems. Before long, law enforcement begins treating the death as a possible murder and Jo is the prime suspect.


“What a wonderful dark, quirky, and complex debut novel this is. Canada’s north was never more sinister. Jo Silver is a character who needs more than one book.”
– Ian Hamilton, author of the internationally bestselling Ava Lee series

The deeper that Jo is drawn into the investigation, the more she finds that everyone is hiding something. Ultimately, Jo must piece together fragments of her own memory about the night in question, culminating in a startling revelation. 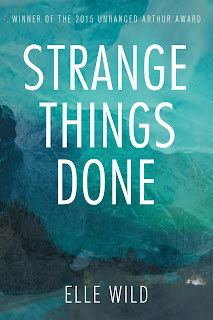 Strange Things Done is a top-notch thriller — a tense and stylish crime novel that explores the double themes of trust and betrayal against a snow-swept backdrop of the Canadian north. We would like to thank Elle for taking part in A Conversation... and wish her luck with her writing for the future.

My journey to publishing has been rather circuitous. I spent years as a short filmmaker, then worked in advertising, wrote and hosted a CBC radio show in Canada, and then finally began my novel during an Artist in Residency stint in Dawson City, in the Yukon. I continued working on the story when I moved to the U.K., and finally entered the manuscript in some contests there. It was shortlisted in the “Criminal Lines” contest by London literary agency A.M. Heath and in the Harvill Secker/Telegraph Crime Competition, among others, and finally won the Arthur Ellis Award in Canada for Best Unpublished First Crime Novel, which is when it was picked up for publication. Strange Things Done launched in North America on September 24th and is coming soon to the U.K.

My favourite thing about being a writer is doing a lot of daydreaming. When Strange published this fall, it felt like I’d downloaded a long daydream in book form that someone else could then upload to their brain and enjoy. It’s a funny feeling – but a pretty wonderful one. I kept sneaking into Chapters Indigo in Vancouver to see my book on the “W” shelf next to Irvine Welsh. It still feels very surreal.

I see the role of writer as being primarily to entertain an audience and provide a passport into another world.  That said, I think there’s also an opportunity whenever someone spends time in another person’s head to experience empathy, another perspective, another culture, and to increase our understanding of the human condition.

I empathise with all of the characters in my novel and short stories, even the ones I wouldn’t spend time with if they existed in real life. I’m fascinated by the grey area that exists in all human beings. To me, the most interesting characters in literature are the ones who operate in that moral grey area; they’re the characters who are most in conflict, and conflict creates drama and forces difficult but interesting choices. As a reader, I love it when an author gets me to understand a character’s choice and empathise with them, even if it is the wrong choice from a moral perspective. In Strange Things Done, I tried to create a world where everyone is keeping secrets and making dubious choices, but hopefully the reader will nonetheless empathise with the characters.

One of the main characters in my debut novel is Canadian First Nations, from the Tr’ondëk Hwëch’in band in Dawson City, Yukon. The Klondike Institute of Art and Culture (KIAC) helped pair me with a representative of the Tr’ondëk Hwëch’in while I was in Dawson researching the story, so that I might be able to ask questions about who I thought the character might be, and to better establish what might drive my character, what kind of issues he would face, and what his own personal conflicts might be. All of the details were called into question, things like where the character might live, or whether or not he would still be single if he were older, (unlikely, I was told, as people marry much younger in the North). I had to change the age of my character, and many of the little details about him and what made him tick. I was extremely fortunate to have that kind of research assistance.

Oh, that’s a challenging question, as I am a person who is torn equally between two places, the U.K. and Canada. Here in Canada, I live on an island off the rugged coast of BC. I’m spoiled with lush fern and forest views from the window of my home office, and I’m a five-minute drive to the beach. Often, though, I miss my old loft office in the Victorian house we owned in the U.K., and the views of rolling farmland just outside the charming village of Box, near Bath. Given the choice, I’d flit back and forth between the two worlds at random. At the moment, I settle for importing my old Box neighbours in from the U.K. for summer and winter holidays. I try to get back whenever I can to visit, and to research my next novel, which is set in Victorian London and Dorset.

I wish I’d written Alias Grace by Margaret Atwood. It’s a wonderful story, speaking of empathy and characters who operate in the moral grey area.

I think you have to be prepared to set your first ten drafts on fire, and just keep the story evolving. Have trusted readers provide critiques of each draft. Then put it away for a while and come back to it with a fresh perspective. Try not to absorb the negative remarks yet also try to learn from them. (It’s a difficult balance to find, but I think it becomes easier with time.) Ignore anyone who tells you that getting published is difficult or impossible. Persevere. Believe.

Ooh, I’m so excited to start working properly on the next novel. This story is a historical mystery set in Victorian London and Dorset, called The Secret Bones. Can’t say more than that at the moment, but I will keep you posted.

Probably Alice in Wonderland, because I always admired her great (if troublesome) curiosity and willingness to plunge herself into strange new worlds.