It’s as plain as day that my little life is about to plummet so far down in the gloomy depths of the psyche, there is no way back up without a miracle – and who could believe in any of that miracle bollocks after a decade of Catholic schooling? 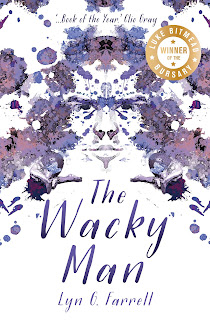 Amanda May Duffy decides to lock herself in her room and give up on the world.

She’s a trouble maker, bunks off school and hardly has a friend. She’s attacked every mirror she can see. Little does anyone know that she keeps a piece of jagged glass with her.

Her words are spewing anger and frustration. She’s furious. She mocks at the people who have tried to talk her round; the psychiatrists, her mother and her English teacher, Mr. Kramm. She’s beyond help.

In Wacky Man, Lynn G. Farrell’s protagonist is a battered child. Growing up with a nonchalant mother who battles with her untreated depression and an abusive father, Amanda is a voice only a handful of people would turn round and listen to. Not only is she brutal about what has happened to her childhood, but also she shows her fists.

Amanda takes a momentary bow off the stage when Farrell goes back to where it all begins. Barbara meets her charming fiancé Seamus Duffy on the dance floor. He introduces her to his big family while they go to Dublin for his sister’s wedding.


Before she has had a chance to react she is surrounded by three young women who have come tearing out of  the house. One of them is Might-be-Marie, who says,’Here she is – his fiancée.’ She says the word proudly and the girls crowd round. All of them, like her, are teenagers, though at the younger end to her. They stare at her as if she were a movie star dropped in. She is hugged by each in turn, who fire off their names and then bombard her with questions about ‘Would her dress be from London or would it be from Manchester?’ and ‘What brand is her lipstick?’

Barbara scarcely copes with motherhood. She has a difficult labour with her twins’ Jammie and Tommo. Moreover, she has to deal with a rough husband; Seamus isn’t anything but a brute. Fierce and abusive. The moment he steps into the house his hard-working-family-mask is off.

Until recently, mental health issues among young people were often swept under the carpet. Although according to Young Minds, 1 in 10 suicides in the UK occurs to people between 15 and 24. Among teenagers, rates of depression and anxiety have increased by 70% in the past 25 years, particularly since the mid 1980’s. More importantly, the intertwining with domestic violence is tough to chew.

Yet Farrell ploughs on; her determination to discuss the devastating consequences of a much complicated matter deserves her winning the Luke Bitmead Bursary Award. The Wacky Man may not be an easy read, but the expose on the interdependent factors that affect the children in the book is amazing.
Look who it isn’t. Yes, that was me screaming. Because I felt I like it, that’s why. I feel like I’m going to burst, I scream. Except I don’t really feel like it’s me. It’s like another side of me, inside, that wants to scream and I can’t stop it. I feel like I’m watching the other me doing it, gliding above myself like a plane circling a trapped animal, like I have no control over the me that is screaming. You don’t have to stare at me like that, I know I’m mental. Much more of this solitary confinement and I’ll be eating fucking spiders and pulling out my teeth like Papillon. What? What’s Papillon? It’s a he, not a what. Steve McQueen? Dustin Hoffman? Never mind. Anyway, there you have it – my dad.

In her monologues, Amanda does her best to piece together what she can about herself. About her parents. About her brothers’ untimely fleeing home as soon as they reach sixteen. Above all, about her tyrannical father.

Despite the heart-wrenching portrayals, Farrell marvels at bringing forward her points about the power of an abuser. Throughout the story readers might feel a chill at the back of their nape. As Seamus Duffy looms in the background with a sneer, his children scamper away. The sheer neglect on the part of the authorities and the community giving a cold shoulder to the children’s suffering, is enough to rub salt in the wounds. The fleeting happy moments Amanda has with aunt Pammy, a respite with her granny and little sympathies from a handful of people feel sporadic.

Suffice to say that Farrell’s deep understanding on the matter and her superb but horrifying scenes play a significant part to her solid plot. Nonetheless, in the age of strong female characters, it’s intriguing to realise that Amanda and Barbara seem to lose their battles. In spite of her postpartum psychosis, Barbara believes she’s made her bed and must lie on it. She takes refuges with her ‘magical’ pills. As for Amanda, she becomes more difficult and keeps pushing away the people who genuinely care for her.

On another note, how different would have been if the history of violence had been told from Barbara’s viewpoints? On the one hand, Farrell’s approach of sandwiching Amanda’s voice with the flashback of events from third-person point of views enables readers to follow the building up of the conflicts that morph Amanda into her current state; from a fighter who stands up to her father to the pessimistic, broken girl. On the other hand, the switching from the past to present in the intervening parts gives the impression of two different Amanda's with a touch of Barbara in her and vice versa. Besides, there’s little about Seamus. What had his childhood been like? Or, does he deserve no sympathy at all?

At the penultimate point the quest remains: can Amanda be saved? Will she save herself? Or will the jagged piece of mirror she’s been keeping be her way out?

I know what I am. I am a name typed on a form in a file inside a drawer at the back of an office. I am a document tutted over by people who go home and love their kids. I am a fifteen-year-old smear on the arse of society. I am something not right, something broken down and busted, something to be put away and forgotten.....

Sometimes the uneasiest thing to read is by far the worth reading thing.

Thanks to Legend Press for the review copy.

Posted by Greenacre Writers at 14:27