A Conversation with Alex Wheatle 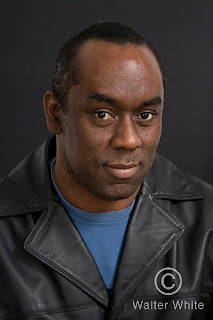 Born in 1963 to Jamaican parents living in Brixton, Alex Wheatle spent most of his childhood in a Surrey children’s home. He returned to Brixton in 1977 where he founded the Crucial Rocker sound system and performed his own songs and lyrics under the name of Yardman Irie. He spent a short stint in prison following the Brixton uprising of 1981. Following his release from prison he continued to write poems and lyrics and became known as the Brixtonbard.

His books are on school reading lists, Alex takes part in Black History Month every year, works with Booktrust and the Children’s Discovery Centre to promote reading. He is representing English PEN. He teaches in various places including Lambeth College, holds workshops in prisons and is frequently invited to schools to speak to students, inspiring in them with his own story a passion for literature.

Alex also appears regularly on BBC1’s The One Show and on radio. He wrote and performed his own one-man autobiographical show for Tara Arts, Uprising, and took the performance on tour in October 2012 and in 2013 all over the country. Recently his play, Shame and Scandal, was performed at the Albany Theatre. Alex has appeared at and will be appearing at Harrogate Crime Writing Festival, Hay Festival, Bristol Festival of Ideas, Edinburgh Book Festival and of course our own Finchley Literary Festival, amongst others.

He was awarded an MBE in the Queen’s Birthday Honours list for services to literature in 2008. A favourite of reading groups and libraries, he is the UK’s most read Black British author.

He is working on a non-fiction book about Black Britain and on more Young Adult novels. He lives with his family in London.

Greenacre Writers are delighted that Alex's last novel Liccle Bit has been nominated for the 2016 CILIP Carnegie medal. This was Alex’s first young adult novel. 'What a gripping tale of family and friends, love and loyalty... Lemar's voice is so strong and I loved the humour in it too.' Malorie Blackman, Children's Laureate. 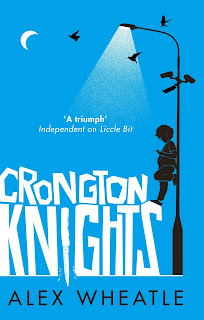 His latest book Crongton Knights, due out 3rd March, is already creating a huge amount of interest. Living on the South Crongton council estate has its worries - and life for McKay has been even tougher since his mum died. His dad has been working all hours to keep the bailiffs from their door. His brother is always out riding the streets at night, tempting trouble. And now, having strayed off his turf on a 'heroic' (if misguided) mission to help out a girl, McKay finds himself facing a friend's crazy ex-boyfriend, some power-tripping hood-rats and a notoriously violent gangster with a vendetta which hits too close to home.

Poor McKay. He never asked for trouble . . . But during one madcap night of adventure and danger, he will find out who his true friends are and what it means to stick with your family.

Crongton Knights is a very funny, very moving story that shows that although life is testing, the lessons learned the hard way are the ones you'll never forget.

We wish the hugely talented Alex much love and luck for the future and are keeping everything crossed for the Carnegie.

My journey as a writer began in my mid teens when I used to write lyrics for performances on reggae sound systems.  I dreamed of becoming the next Bob Marley, Barrington Levy or Dennis Brown!  The discipline I gained from producing something every week for performance moulded and honed me into the writer I am today.  From a sound system MC, I progressed to poetry and short stories.  I performed my work at poetry jams and venues like the Brixton Brasserie and Under The Arches near Brixton train station.  My first novel, Brixton Rock, was published by Black Amber Books in 1999.  For the themes in my debut work I used much of my own real lived experiences and those of my friends too.  I repeated the trick with my second novel, East of Acre Lane.

Primarily, I see my role as a writer to tell a good story and entertain.  If within that story I can educate, show readers a narrative and a slice of life that they are unfamiliar with, bring a certain truth to the setting and theme of a story and make people reflect about the characters in my tale that might challenge their preconceived views, I’ll take that as a bonus.  I really don’t see myself as any different from the story-telling sound MCs of my youth or the griots of my ancestral past to what I create today.

I created Noel in The Dirty South who initially I disliked.  He had a foul mouth, was rude to women and could be very violent.  As my story developed I became very fond of him.  He had aggressive traits but possessed a tender core.  He was very loyal to those close to him. In the end he simply craved his mother’s love.

4. Last October, GW organised #diverseauthorday. What has been your experience of writing about diverse characters?

The diversity debate has been raging on both sides of the Atlantic with the furore about the Oscars are so white controversy and the writers of colour I know who feel excluded from the major literature festivals within these shores.  When I was a kid one of my heroes was Mark Lester who played Oliver Twist in Carol Reed’s multi award-winning film musical.  I cried on his low points and cheered on his successes.  Although Oliver Twist was white I could totally engage with the character and I was desperate for him to consider myself as his friend.  My point is (and this is for any film, drama and fiction gatekeepers out there) all we writers of colour are asking is for you to love, appreciate and value our narratives, themes, characters, heroes and villains as much as we love, value and appreciate yours.

I have been very fortunate to have developed ideas for novels in the South of France (a beautiful place called Vauvert near the Carmargue) Jamaica, Washington DC and Miami.  I’d love to write somewhere like Hawaii – one because of its people and culture and two because I was a huge fan of Magnum, the series starring Tom Selleck and three because I’d get away every day with wearing Hawaiian shirts, three-quarter pants and sandals!  I probably wouldn’t get any work done!

My advice for aspiring novelists is to try and produce something every week – even if it’s a page or so.  Develop your discipline not just to create but to edit and improve.  My next tip is to write the book that you want to buy – be passionate about your subject matter.

I’m working on the 3rd book of the Crongton series.  All I can reveal about it is that I nicked the title from a classic 70s pop song!

Here is a fantastic review about Crongton Knights due out 3rd March and published by Little, Brown Book Group

Posted by Greenacre Writers at 10:06