A Conversation with Frances Mensah Williams 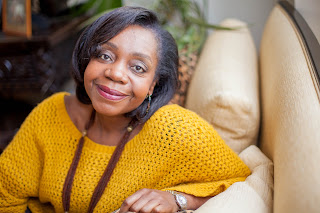 Frances Mensah Williams was born in Ghana and although she moved to the United Kingdom when she was just six years old, Ghana – and Africa in general – is still very important in her life. This interest is reflected in her writing of both non-fiction and fiction and in her work. Frances studied at Reading University and took up a career in Human Resources Management, Training and Consultancy where she worked in both the UK and Africa.

Before embarking on a career in fiction, Frances wrote two non-fiction books: I Want to Work in Africa: How to Move Your Career to the World’s Most Exciting Continent and Everyday Heroes: Learning from the Careers of Successful Black Professionals. She also wrote articles for magazines and newspapers and has continued to do so while holding the position as publisher of ReConnectAfrica.Com and working as Chief Executive of Interims for Development Ltd. She also speaks at events in connection with Africa. Frances now lives with her family in London.

The draft for her first novel Pasta to Pigfoot (May 2015) was written when she was living and working in Ghana and Frances’ follow up novel from Pasta to Pigfoot: Second Helpings was recently published in May 2016. 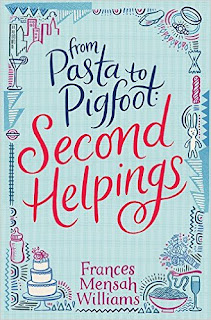 Pasta fanatic Faye Bonsu seems to have it all: a drop-dead gorgeous and successful boyfriend, a bourgeoning career as an interior designer and a rent-free mansion in leafy Hampstead to call home. But with all her friends shifting into yummy mummy mode, a man who seems to have no desire to put a ring on it, tricky clients, and an attractive and very single boss, things are not quite as straightforward as they might appear.

Hoping to escape from her suddenly complicated life and revive her wilting romance, Faye returns to sunny Ghana for what she hopes will be the time of her life. But life doesn’t always offer second chances and when disaster strikes, she is forced to confront the biggest question of her life and to make a choice that comes with consequences she will have to live with forever.

We thank Frances for joining us in conversation and wish her lots of success with Second Helpings and happy writing for the third novel she is currently working on.

My journey started as a voracious child-reader who simply devoured books. My author training came from years of Saturday afternoons sitting on the window seat of Hampstead Garden Suburb Library reading as much as I could before being turfed out, and then carrying at least five books home with me until the next weekend. Spending so much time in the worlds created by others, it seemed only natural to me to create my own characters and my own version of the multicultural world that I grew up in. My journey took me from London to Ghana where, for a few years, I experienced first-hand the challenge of blending two cultures and the fascinating – and sometimes hilarious - clashes that could arise; a period of time that informed some aspects of my first novel. Writing has taken many forms for me along the way, from book reviews, contributing chapters to journals and books, numerous articles and opinion pieces, to establishing an online magazine. It was only after writing two non-fiction books that tackled the paucity of black ‘everyday people’ role models and revealed career opportunities in Africa respectively, that my journey has a fiction writer finally came to fruition in 2015 with the publication of my first novel, From Pasta to Pigfoot.

For me, writing is a way of giving voice and structure to ideas and characters that appear randomly and swill around my brain until I put them to paper. It’s a way of releasing stories that I can visualise internally, almost like a movie, hoping that others will also find them interesting. What I like most is that it gives me a platform to take people into a world that many people don’t get to see often or at all, and to introduce characters that may have a different ethnicity but who have the same hopes, dreams and insecurities and who suffer the same mishaps as any reader.

I have to hand that prize to Michael, who is the boyfriend of Faye, the protagonist in From Pasta to Pigfoot – and judging by the hissing he gets at book readings, I’m not the only one who thinks so! He’s patronising, opinionated, insensitive and has a completely overblown Pygmalion complex. I’m sure everyone has met and detested a ‘Michael’ at some point in our lives – that person who criticises what you eat, wear, do, and even think. But I can also understand why he has developed into such a culture fascist. We all want to belong and to feel part of a group or society that accepts and validates us even if, as in his case, he takes it all far too seriously.

Last October Greenacre Writers organised #diverseauthorday. What has been your experience writing about characters of colour?
Characters of colour are the real-life characters that surround me every day so writing about them doesn’t feel any different to writing about white characters. As a black woman, I’m the norm to me, and because my family and friends of colour are as much a part of my daily world as my white friends and family, I don’t see us/them as different, except in their personalities. Growing up, I lived in several different countries and while I recognise differences, take for instance those between my country of origin, Ghana, and the UK; I don’t feel wedded to any one worldview or culture so strongly that the other feels ‘alien’. I tend to believe that fundamentally people are people and when I write, my concern is that my characters should be engaging and entertaining, whatever their skin colour.

Somewhere with a warm climate where I can write on a cool balcony overlooking the sea. And ideally where there’s no kitchen, so I don’t have to stop writing to cook dinner for teenagers.

It would have to be The No. 1 Ladies’ Detective Agency because Alexander McCall Smith created not only an unforgettable character in Precious Ramotswe, but a world of courtliness and humour where even the scoundrels are charming. The book informs and entertains, but also shows a different facet to Botswana and the Africa we tend to see in novels.

I tend to think that, like me, most people nod wisely at words of advice and then promptly forget them. My contribution to a nodding-wisely moment would be to encourage anyone who wants to write to quite simply just do it. Don’t apologise for your voice or feel the need to explain the stories you want to share; just write what comes to you, and write it well.

I’m working on the manuscript of what I’m hoping will be my third novel and trying to live with the different voices from the characters constantly popping in and out of my head. My second novel, From Pasta to Pigfoot: Second Helpings – the sequel to From Pasta to Pigfoot – has just been published. As with the first book, Second Helpings is set in London and Ghana, and follows the next phase of Faye’s adventures in life and love.


From Pasta to Pigfoot: Second Helpings is published by Jacaranda Books.

Posted by Greenacre Writers at 12:36