A Conversation with Elizabeth Haynes 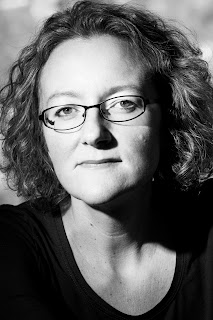 Elizabeth Haynes grew up in Seaford, Sussex, and studied English, German and Art History at the University of Leicester.

Her previous jobs have included selling cars, working as a medical rep and selling printing consumables. A former police intelligence analyst, she now writes full time and lives in Norfolk with her husband and son.

Haynes’s first novel Into the Darkest Corner was Amazon’s Best Book of the Year 2011 and a New York Times bestseller. Now published in 37 countries, it was originally written as part of National Novel Writing Month (NaNoWriMo), an online challenge to write a 50,000 word novel in the month of November.

Her latest novel Never Alone was published by Myriad in 2016. Elizabeth is currently working on a historical crime novel, based on an unsolved murder in 1843.

We thank Elizabeth for joining us in Conversation and wish her lots of success for the future. 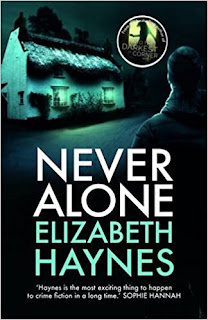 Sarah Carpenter lives with her two dogs in a farmhouse, high on the North Yorkshire moors. Alone for the first time since her husband died and her children left home, she isn’t exactly lonely but welcomes the arrival of an old friend, Aiden Beck, who needs a place to stay.

Aiden clearly has secrets, but then so does Sarah, and that’s no reason not to respond to his warmth and charm. But something doesn’t feel quite right. As the weather closes in, and snowfall blocks the roads, events take a dramatic turn and suddenly Sarah finds herself in terrible danger, unsure of who she can trust.

Like many of us, I’ve always written. I went from stories serialised and passed around the playground and keeping a diary, to snippets of dialogue and story ideas that never saw the light of day, and ended up being abandoned when I ran out of steam or got stuck. What made the difference for me was being introduced to NaNoWriMo in 2005. It gave me the excuse to take writing seriously, whilst still having fun with it. For the first time, I was able to carry on over that hump of being stuck, and actually finish something.

In 2008 I wrote a complete novel that I thought might be worth editing; that book became Into The Darkest Corner. I still take part in NaNoWriMo every year and all of my six published books were originally written in November.

I think my role is to encourage other people, through NaNoWriMo, and every time I meet anyone who is writing themselves. Writing is seen as a bit self-indulgent and so you have to sneak time into your busy life to do it; almost like you need to ask permission to go and write. If you need an excuse I’ll give it to you. Write, because you can. Write because it’s fun, and it does your soul good. And you never know what might become of it.

Writing my own books is something that still happens in private, for fun, and cannot feel like a job to me or I wouldn’t be able to do it. Writing the first draft of anything, during November, is the best fun of all. It gets a bit serious and work-like after that.

I think that’s inevitable. Characters need to be layered. Even the most hideous of villains needs to have a reason for that appalling behaviour, whether it justifies their actions or not. I wrote a female character once who was flighty and gorgeous and self-obsessed; I didn’t like her at all, until I realised that I’d be exactly like her if I was a size 12 and beautiful – after that I treated her with a little more kindness.

I’m sure others will have said this, but my characters come to life by themselves. I start writing them when they are mere shadows, and they reveal themselves to me over time. It doesn’t always work – sometimes they resolutely refuse to come to life, and then I need to rethink what it is I’m trying to do with them. Sometimes they are real straight away, sometimes it takes a particular scene or challenge to find out who they really are, and then I might have to go back and rework the start.

This is particularly the case for the introverts; a female character I’m writing now was decidedly frosty towards me until I wrote about her from someone else’s point of view. She was completely different to them! She just needed the right person to bring her out of her shell.

In my third book, Human Remains, I wrote from the perspective of two people who were both socially very awkward. The male character, Colin, did not want to behave; it was as if he thought I wasn’t the right person to be writing about him. He wanted me to prove myself as a writer, and he kept challenging me by behaving in the most awful ways. Finally when I persevered he let me in, and I saw that for all his intelligence and his qualifications and his testosterone he was really just very lonely. But all the misbehaving had to stay in the book so that he made sense; even these days, when someone tells me they’re about to read Human Remains, I say to them, ‘sorry about Colin’.

I realise this all sounds a bit weird. I mean, these are my characters – surely they’re entirely under my control? I suppose they must be, but I know my writing is always much better when I let them speak for themselves.

This is a tough one. Fatty from the Enid Blyton ‘Five Find Outers and Dog’ series, because he was the clever one who always came up with a plan. John Flory from Orwell’s Burmese Days. Simon from Lord of the Flies. I think I always fall for the vulnerable ones.

I would quite like a holiday on a tropical island somewhere, without the hassle of getting there, but I don’t think I’d get much work done. I write best in my local tea room, with cake, so if we’re talking about supernatural forces, it would be quite nice to be able to eat unlimited cake without the consequences. Cake is brain food.

I’ve been thinking about this one for a good ten minutes and I can’t think of just one. I wish I’d written all of the books I’ve loved, but to do that I’d have to be a different person or an expert in different things. I will say that I wish I could write like Jeanette Winterson, or Amy Sackville, or Nikki Gemmell. My aspiration is to write beautifully.

My thoughts on it are: if I can do this, you can too. If you’re writing, that makes you a writer, there’s no ‘would be’ about it. Take yourself seriously, work hard at improving, listen to feedback without being discouraged by it. Don’t stand in your own way.

Also, if you struggle with time to write, or if you’ve never managed to write a full-length novel before, try NaNoWriMo. It’s only a month, and it’s great fun.

I am working on a fictionalisation of a real unsolved murder from 1843. I have never written anything historical before, so the research is presenting new challenges! Hopefully it might be out late next year.