Don't say a Word by A L Bird


Ten year old Josh means the world to Jen Sutton. She would do anything to protect her son and keep him safe – as most caring mothers would. It becomes clear immediately, however, that Jen protects her son more than most. 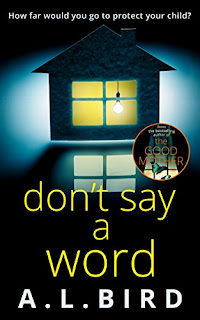 Something as innocent as a postcard, delivered early one morning, sends Jen reeling.

“My stomach twists. I flip back to the name again. And that’s when I see. There’s a stamp, but no postmark. Where the postmark should be, it’s written: ‘By hand’…We both know who it was. And that Josh isn’t safe.”

As fear wrap itself around her, knowing they have been found, Jen is forced to face the past yet again as their safety is threatened. Their life, built on a lie, begins to crumble around her.

Meanwhile, Jen has her hands full at work when Tim, one of the lawyers, asks her to help him on a new case. She is thrilled to be asked to work on something decent rather than the mundane admin jobs usually pushed her way.

Tim says: “Keep this new matter between us OK? Very confidential, I’ll explain why later...If you need to speak to someone, you can talk to Daniel Farley. I’ve instructed him.”

Jen, understandably is excited. A confidential case and the opportunity to rekindle her friendship with the gorgeous Dan Farley. As Jen tries to juggle work and the problems with home life, she feels any control she had slipping away.

Why is Jen so afraid of the past? What  - or who - are they running from? And why has Tim felt the need to keep the case they are working on so confidential?

Don’t say a Word is a psychological thriller with all the twists and turns that A L Bird is known for. The style of writing – Jen’s first person narrative – took a little getting used to but as her character developed and her personality came through it settled into a rhythm. The style – a little jumpy – reflected Jen’s anxiety, which made sense as the story unravelled.

It is an easy read and keeps the reader engrossed to the very last page.

Don't say a word is published by HQ and we thank them for the review copy.