Deep Down Dead by Steph Broadribb

He’s sitting opposite me, arms folded, legs stretched out beneath the table. Waiting. In this windowless box it’s impossible to tell how much time has passed. Still, I can’t look at him, not yet, so I focus just below his eyes, where the dark shadows lie. My heart’s racing, a voice in my head screams, run, just run. I want to, I surely do, but I can’t. For all that’s gone down, someone has to pay. It’s time for me to pony up.
‘You lookin’ at me now? Good. So answer the question.’

Lori Anderson knows her life depends on how good her answers are. Convincing ‘him’ is another problem. 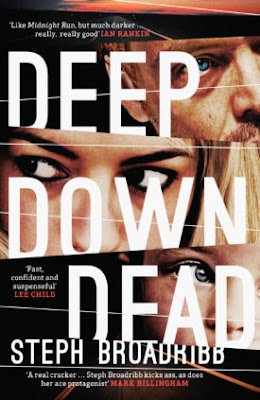 From the word go, Deep Down Dead grips readers with its adrenalin-packed plot. Steph Broadribb’s digs into the topsy-turvy world of a female bounty hunter; her heroine is a single mother of a nine-year-old daughter with cancer. If she wants Dakota’s much-needed treatment to continue, she has to act fast. She’s three months behind with the payment, so time’s running out. There is one job that can settle the arrears, but the one she would avoid most. No sooner has she seen the brief than she realises she should walk away. But, what other choice does she have to find $15,000 within a week?

Wrestling with emotions, she prepares the journey to West Virginia with one heavy burden in mind: she must bring Dakota with her to pick up JT. The last time she saw him was ten years ago, on a bloody night that makes Lori swear never to fire a gun ever again in her life. What’s more, JT is far from being a stranger: he was her mentor and once a lover.

What seems to be a calculated-risk job with the big reward turns into a huge calamity. Moments after she gets Dakota out of a farmhouse where he’s been kept, police are after him for three homicide charges. The games changes when Dakota is kidnapped shortly afterwards. Defying her boss to hand over JT to the police, Lori knows that he’s her ticket to save Dakota. Yet she learns that it’s not just an exchange; the same people who take away her daughter will kill JT, as soon as they get proof of the crime. Can she let that happen?

Broadribb’s training as a bounty hunter no doubt has inspired this smashing debut novel. Good looking and savvy, Lori is not an ordinary working momma; her profession scorns the gender stereotype with a lucid portrayal of difficulties and dilemmas faced by every mother.
There’s no holding back in exposing Lori’s vulnerability as a victim of childhood abuse and an erstwhile battered wife. Broadribb paces Lori’s opening of her Pandora’s Box well amidst the disastrous scenes filled with kick-ass actions and guilt in every turn. The ebb and flow of her old feelings to JT surge in a fleeting moment that feel like a necessity to move forward the plot than a romance re-told. It’s little surprise that JT becomes an unprecedented sidekick despite her golden rule to never trust anyone. Yet shadowing by the thoughts of how she feels about Dakota in the hands of her captors, is the deeper mess of the night ten years ago.
In creating Lori Broadribb has done a great job in her meticulous study of characters. It’s noticeable that Lori has lived in Broadribb’s head long enough before being morphed into the imperfect but resourceful girl. For Lori’s viewpoint is clear and consistent throughout, although she ought to mull things in her mind less. I hope in the next book there’ll be more about JT in his own voice.
I take a sip of the raspberry-flavoured water. Look up, and meet the gaze of the man sitting opposite me. It’s the first time I’ve looked at him since I began to tell my story. ‘That’s it. You know the rest. I called you, you came here, we’re talking.
Special Agent Monroe nods. ‘I believe you. Sounds a hell of a three days.’
‘Sure was. Do we have a deal?’

Broadribb is one ‘hell’ of a writer to watch for. I am looking forward to reading the Deep Down Trouble, being excited for Lori’s next mission and how she has to corroborate with the authority. Has she more enemies? Make or break with JT? Will Monroe be a sidekick?

Thank you to Orenda Books for the review copy.

Posted by Greenacre Writers at 12:03