A Conversation with Vaseem Khan 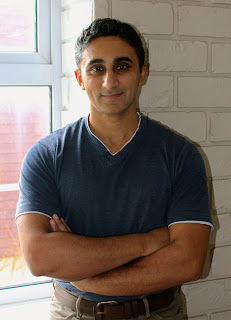 Vaseem Khan was born in London in 1973. After obtaining a degree in Accounting and Finance at the London School of Economics he worked in Mumbai, India for ten years. On returning to London in 2006 he joined the Department of Security and Crime Science, University College London and still works there today. Throughout his working years, encouraged by his love of great literature, Vaseem has always found time to write.

His debut novel The Unexpected Inheritance of Inspector Chopra was published in August 2015 to excellent reviews. It is the first in the Baby Ganesh detective agency series and Vaseem is currently working on books two and three.

It was his experiences in Mumbai that were the inspiration for the series, Vaseem told Claudia Winkleman on BBC Radio 2’s Art Show earlier this month. On arriving in Mumbai he was greeted with the unusual sight of seeing an elephant wandering down the centre of the road. This vision stayed with him and a passion for elephants developed – after cricket and literature of course! 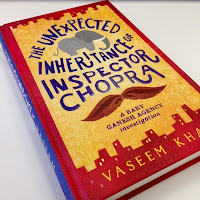 As Inspector Chopra, forced into early retirement, is dressing for his last day at Sahar police station his wife Poppy informs him that he has inherited an elephant. On arrival at the station a large crowd is gathered: a young man has died and it is thought that he drowned whist drunk. His mother believes he was killed and does not trust the police to investigate her son’s death as they are a poor family.

During the ensuing days, Chopra feels a certain desolation as he finds little of interest to fill his time. The young elephant is refusing to eat and he discovers that the new inspector is refusing a post mortem to establish the cause of death of the young man.

Ashwin Chopra, a principled and honest man, wishes to do what is right for the elephant and the dead boy so he seeks knowledge on how to care for baby Ganesha and commences his own investigation into the boy’s death.

Chopra’s enquiries take him to some of the darkest places of the city as he realises there is more to the young man’s death than was first suspected and Ganesha proves to be of valuable help in the search for the truth.

The Unexpected Inheritance of Inspector Chopra is a well written book, easy to read and very entertaining with wonderful descriptions of the vibrant city of Mumbai. We wish Vaseem good luck with the novel and look forward to reading the next in the series, The Perplexing Theft of the Jewel in the Crown.

Tell us of your journey as a writer:

I wrote my first novel aged 17. Of course, I thought it would be a runaway bestseller. I sent it off, sat back and waited for the contract. Instead I got my first rejection letter! I wrote for 20 years before an agent accepted me. I had a great career in the real world in the meantime, which made it difficult to find time to write but I kept at it. I don’t think you can decide to be a writer. The American author John Irving once wrote that a defining moment for him came when another novelist pointed out to him ‘anything else he did except writing was going to be vaguely unsatisfying.' So I think the first thing that any writer needs to do is make the mental adjustment from saying I’d like to be a writer to saying – I am a writer. That’s what I did!

For me a writer’s role is to transport readers to a different time, place or situation and then to immerse them in the plot of the particular novel they have written. Personally, I think a writer’s principal job is to entertain. I have read books which have been incredibly erudite and complex but somewhere along the line the author has started to write for him/herself rather than the reader. I have tried to keep my Baby Ganesh detective agency series – beginning with The Unexpected Inheritance of Inspector Chopra – light, charming and entertaining.

The best thing about writing for me is bringing characters to life. I loved creating Inspector Chopra and his elephant sidekick baby Ganesha, shaping their personalities and their behaviour. After a while you realise that you can predict how they will react in any given situation – that’s when you know your characters have truly become real.

Have you ever created a character who you dislike but find yourself empathising with?
In the third novel in my Baby Ganesh agency series – which I am still writing – we will meet the Queen of Mysore, a eunuch who runs a group of other eunuchs. She is someone who is involved in petty crime and is ruthless in her dealings with others. And yet she cares deeply about the eunuchs under her wing. She has suffered greatly in life which has shaped her views about the world. Eunuchs are at the margins of Indian society and suffer from prejudice and abuse. So although the Queen is not the most likeable of characters nevertheless she is someone I do empathise with.

I would love to spend a couple of months in the High Arctic! I have an idea to write a crime novel set in the High Arctic – where temperatures can fall to -50C, where night lasts four months, and polar bears are forever on the prowl. As I was thinking about this I thought what an amazing place to actually write. The very northernmost communities of Inuit natives live simple lives, with very little intrusion from the sorts of things that continually distract us in the West. Of course, their lives aren’t easy battling against the elements. But I like to picture myself in a warm cabin, surrounded by the sounds of an eternal winter, with nothing to do except write. And if I need inspiration all I have to do is go out into some of the most incredible scenery on earth!

Midnight’s Children by Salman Rushdie. This is the best book about India that I have ever read. It is the book that made Salman Rushdie famous and was voted the ‘Booker of Bookers’ meaning it was voted the best Booker prize winner over a 40 year period! Why do I wish that I had written it? This book introduced me to magical realism as a literary concept, and showed me how it can be brilliantly used to illuminate real events from history. The book tackles India’s transition from the Raj to an independent nation, and vividly animates Indian life during that period through the eyes of the protagonist, Saleem Sinai, a boy born on the stroke of Independence with amazing gifts – telepathy and an incredible sense of smell!

Write, write and then, when you’re absolutely sick of it, write some more. I think perspective is what most novice writers lack. The real question any writer should ask themselves is ‘am I good enough?’ In other words: is my writing of a sufficient standard to put together a coherent, well written novel in the genre I want to write in? I estimate I wrote over a million words before I was published, completing half-a-dozen novels, garnering more rejection letters than I care to mention. Looking back at my early work I not only cringe but can see how I have now become a vastly better writer in terms of the actual quality of the writing but also in terms of pace, plot and characterisation. Unless you are one of the lucky ones who hit instant success your road as a writer will be similar. Never give up.

I like to work on a lot of things simultaneously. I have just completed the draft for the second in the Baby Ganesh agency series The Perplexing Theft of the Jewel in the Crown – which will be out next spring. [This book is now published] This book is about the theft of the world’s most famous diamond – the Kohinoor – which was originally mined in India. The Kohinoor is currently part of the British Crown Jewels. In the novel the Crown Jewels have been brought to India for a special exhibition. A daring robbery sees the Kohinoor stolen and Chopra and Ganesha called in to try and recover the great diamond.

I am also currently writing the third in the series (no title yet) where Chopra and Ganesha are on the trail of a kidnapped Bollywood star. And I’m also fleshing out the plot for the fourth episode when they will be travelling outside of Mumbai to Chopra’s native village in Punjab, north India, to try to unravel the mystery of Ganesha’s origins. So keeping busy!

Posted by Greenacre Writers at 15:10