A Conversation With Jane Rogers

Jane Rogers has written nine novels, including Mr Wroe's Virgins (which she dramatized as an award-winning BBC drama serial), Her Living Image (which won the Somerset Maugham Award), Island and Promised Lands (which won the Writers' Guild Best Fiction Award). Her most recent novel, The Testament of Jessie Lamb, was longlisted for the 2011 Man Booker Prize, and won the 2012 Arthur C. Clarke Award. Her short story collection, Hitting Trees with Sticks, was shortlisted for the 2013 Edgehill Short Story Prize.

Jane also writes radio drama and adaptations, and has taught writing to a wide range of students. She held fellowships for the Royal Literary Fund (Warwick), at Paris Sorbonne IV, at Cambridge (Judith E Wilson), Hawthornden, and the University of Adelaide. She currently mentors for Gold Dust and will be running a Short Story course for Faber Academy in autumn 2016. She is currently adapting R L Stevenson for radio.

Rogers recognises the coincidences of opposites, of irreconcilable drives, at the quick of human experience. It is this that powers CONRAD & ELEANOR and keeps the reader engrossed... The sequence is a microcosm of the novel's structure, the roiling tempest in Conrad's mind coming to rest in exhausted affirmation. It's brilliantly done - a sustained exploration of the polarities at the enduring heart of love. - Guardian 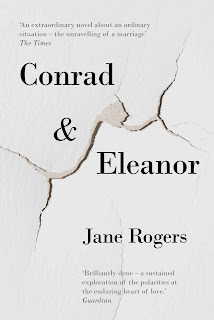 When Conrad fails to return home from a science conference, Eleanor guesses he may at last be reacting to her infidelity. Or has he finally tired of his stagnating job in transplant research? Eleanor’s own scientific career has forged ahead, while Conrad played main carer to their children. The four children, now adult, fear for their father but seem to have little sympathy for their tough ambitious mother.

Meanwhile, a long way from home, Conrad is alone, scared and on the run.

Her observation of our species is tender, precise, illuminating.
- Hilary Mantel

It's a huge honour to have A Conversation With...Jane Rogers. We thoroughly recommend CONRAD & ELEANOR, a novel that ruthlessly explores, a long marriage. How do they do it? And do they have the answers to a successful loving partnership? Read it and find out. We wish Jane much success with her future writing and look forward to reading more of her stories.
Tell us of your journey as a writer

I've been writing stories since I was a child at primary school. At university I wrote for a regular live performance evening, so although fiction is my preferred form, I was writing monologues, because they are more dramatic to perform. That interest in first person voice has stayed with me, and several of my novels are written from the perspectives of intercut, differing, first person voices. In Mr Wroe's Virgins I used four such voices, to tell rather different versions of the same series of events. I finished my first novel while I was pregnant, aged 29, and was lucky enough to have it accepted immediately by Robert McCrumb at Faber. Since then I've published 9 novels, one volume of short stories, and written original drama and adaptations for Radio 4. I also wrote the TV scripts for Mr Wroe's Virgins, which was broadcast back in 1993 but which should finally become available as a DVD this year. My novels vary hugely in subject matter and setting, for example Promised Lands is an historically accurate novel about the First Fleet arriving in Australia in 1788, whereas The Testament of Jessie Lamb is science fiction, telling the story of a young girl at an unspecified date in the future.

Like many writers, I have also had a career as a teacher of writing. I taught on the MA in Writing at Sheffield Hallam for many years, and am currently teaching for Faber Academy.

I like writing because it forces me to think very hard. Sometimes I believe I only know how to really think, deeply and honestly, through writing. I write in order to understand things better, to explore ideas for myself. And for the pleasure of constructing a story.

A number of my characters are dislikeable, but I don’t dislike them! If you are writing from a character's point of view, or in their voice, you have to be able to empathise with them and understand why they behave as they do. All characters are varying shades of grey, if a character was purely evil and hateful, I think it would be a caricature. Nikki Black, in Island, is regarded by some readers as unpleasant. I made her aggressive and prickly, because I wanted to avoid any hint of self pity in the character. I find self-pity, or victimhood, a rather dislikeable characteristic. In fact I have just published an article about this very topic in the March issue of MSLEXIA, talking about stock women characters which writers often fall back on, and examining the way a really good writer, like Elizabeth Strout, avoids such stereotypes.

I have enjoyed it. The one time when I did agonise about this was when I was writing a section in Promised Lands from the point of view of an Aboriginal girl. What right do I have to inhabit someone from not only a different time and place, but an utterly different culture? How can I represent her fairly?

But then I realised that in my writing I have inhabited the characters of men, boys, old women, young girls, differing classes and social backgrounds – why suddenly draw the line at an Aboriginal girl? And the thing which finally really persuaded me, was that all of her tribe were wiped out, so there is no-one with a better claim than me, left to speak for her. She should be heard, her story is an important one. So I told it.

To be honest, I like writing at home – my desk is in the light and it is the right height, and the house is usually quiet. Those are the only things I require! Having said that, I once had a residency in a beautiful cabin in snowy Banff, Canada, and started writing Jessie Lamb there, under more-or-less perfect writing conditions. I wouldn’t mind going back there!

Very hard to say. It probably changes depending on what I am reading. Most recently I really admired, and envied, My Name is Lucy Barton by Elizabeth Strout

Write every day. Don't wait for inspiration or a great idea to come along. Just write something every day, and create a habit.

I'm struggling with a short story about a Jesuit which won't come right. And I'm working on a new science fiction novel which has been in my head for a long time and which I really should crack on and finish as soon as possible.

Alice (in Wonderland) is a strong contender. First because she has such amazing adventures, and second because she is quite outspoken and bossy and argumentative; she is good at standing up for herself, even with the Red Queen.

Conrad and Eleanor will be published in paperback on May 4, by Atlantic.