Emily Midorikawa lectures at City University and at New York University’s London campus. She has taught at the University of Cambridge and the Open University, as well as writing for the Daily Telegraph, the Independent on Sunday, The Times, Aesthetica and Mslexia. Her memoir The Memory Album appeared in Tangled Roots, an Arts Council-sponsored collection that celebrates the stories of mixed-race families. Emily is the winner of the Lucy Cavendish Fiction Prize 2015, and was longlisted for the Mslexia Novel Competition. She was a runner-up in the SI Leeds Literary Prize, judged by Margaret Busby, and the Yeovil Literary Prize, judged by Tracy Chevalier.

Emma Claire Sweeney has lectured at City University, New York University in London, the Open University and the University of Cambridge. Her work has won Arts Council, Royal Literary Fund and Escalator Awards, and has been shortlisted for several others, including the Asham, Wasafiri and Fish. She writes for newspapers and magazines such as the Guardian, the Independent on Sunday, The Times, and Mslexia. Her debut novel Owl Song at Dawn was published by Legend Press in July 2016. The novel has been shortlisted for the BookHugger Book of the Year Award, and Emma has been named an Amazon Rising Star and a Hive Rising Writer. 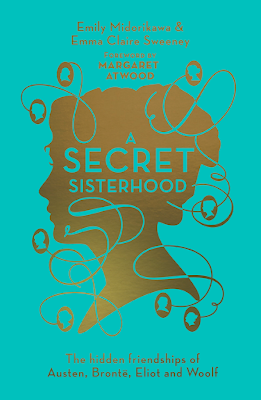 Male literary friendships are the stuff of legend; think Byron and Shelley, Fitzgerald and Hemingway. But the world’s best-loved female authors are usually portrayed as isolated eccentrics. Emily Midorikawa and Emma Claire Sweeney seek to dispel this myth with a wealth of hidden yet startling collaborations.

Through letters and diaries which have never been published before, this fascinating book resurrects these hitherto forgotten stories of female friendships that were sometimes illicit, scandalous and volatile; sometimes supportive, radical or inspiring; but always, until now, tantalisingly consigned to the shadows.

A Secret Sisterhood evolved from the authors’ own friendship. Their blog, Something Rhymed, charts female literary bonds and has been covered in the media and promoted by Margaret Atwood, Sheila Hancock and Kate Mosse, showing that the literary sisterhood is still alive today.

We would like to thank Emily and Emma for taking part in A Conversation...and wish them huge success with their beautiful new book A Secret Sisterhood, published today 1st June 2017, and future writing.

When we first got to know each other, as young English language teachers in Japan, we were both writing stories in secret. Back then, we were so shy about our ambitions that we didn’t even tell each other about them. But after almost a year of being friends, we finally ‘came out’ as aspiring authors. Since then, we have been beside one another every step of the way: reading work-in-progress, sharing news of publishing opportunities, being there to commiserate when the going got tough. Much less frequently, especially in the early years, we had the opportunity to share in moments of celebration. Highlights include the day Emily won the Lucy Cavendish Fiction Prize, or when Emma’s novel Owl Song at Dawn was picked up by a publisher, and, best of all perhaps, when we were jointly commissioned to write A Secret Sisterhood – our book about the literary friendships of Jane Austen, Charlottte Brontё, George Eliot and Virginia Woolf.

It’s a role we love (most of the time anyway), and, as with most writers, it’s one we balance with other responsibilities and interests. For instance, we both teach writing at universities. Working on this book has come with its own particular challenges but also pleasures. Writing as part of a team has guarded against the loneliness that often comes with solitary writing. While it has also meant we’ve both had to be willing to make compromises at times, we feel that the book has definitely benefited from our creative wrangling!

How important has reading been in your life?

We’ve always been keen readers. Back in that first year of our friendship in Japan, and long before we admitted to each other that we had literary aspirations, we often used to discuss books we enjoyed. Having moved to a new country, we were discovering many authors (in translation): popular modern writers, such as Haruki Murakami for example. We were also both keen on several medieval authors from Japan’s Heian Era. We enjoyed talking about Murasaki Shikibu’s Tale of Genji and The Pillow Book of Sei Shōnagon. Over the past few years, writing A Secret Sisterhood together has given us the push we needed to return to many of the classics we read when were younger and look at them through more mature eyes. We’ve both found that the elements of these texts that affect us most deeply now are often very different from the ones we remembered best from our earlier readings.

What led to the creation of A Secret Sisterhood: The Hidden Friendships of Austen, Brontë, Eliot and Woolf?

The book grew out of our blog, Something Rhymed, which celebrates the literary friendships of female authors. That, in turn, grew out of a series of articles we’d written, inspired by our realisation that – while we had heard of the famous friendships of Wordsworth and Coleridge, Byron and Shelley, Hemingway and Fitzgerald – we knew very little about whom the most celebrated female authors turned to for support. We were encouraged by the enthusiasm of readers of Something Rhymed that some of the many friendships we’ve featured on our blog could be explored much more fully in a book. A Secret Sisterhood devotes one quarter each to the stories of the close bonds between Jane Austen and amateur playwright Anne Sharp, Charlotte Brontё and feminist writer Mary Taylor, George Eliot and author of Uncle Tom’s Cabin Harriet Beecher Stowe, and Virginia Woolf and fellow Modernist Katherine Mansfield.

During your research, we understand you’ve uncovered some new documents, can you tell us how a bit more about that?

Our research has meant looking at many unpublished documents. These include letters from Harriet Beecher Stowe to George Eliot, locked up in an archive in New York, and also some previously unknown Austen family papers that we discovered tucked in the backs of old journals.

How important has your own writing friendship been in the production of the book?

The idea for the book grew out of our personal knowledge of the value of a writing friendship, and our questions about who our literary heroines of the past turned to for this kind of support. If we had not been such close writer friends, we would never have written A Secret Sisterhood.

It’s so hard to pick just one. In Emily’s case, these two come to mind straight away: Darrell Rivers in Enid Blyton’s Malory Towers books and Anne Shirley of Anne of Green Gables fame. Strikingly, perhaps, they both had literary ambitions too. Emma was also a huge admirer of Anne of Green Gables, coveting Anne’s puffed sleeves. And she also loved Enid Blyton, so we were destined to become friends! We would love to write about Enid Blyton on our blog but have yet to uncover a friendship she enjoyed with a fellow female writer. If you know of one, please do get in touch via Something Rhymed! Emma’s favourite character was Elizabeth Allen of The Naughtiest Girl series – novels that are all about female friendship.


Thanks to Aurum Press for the review copy.

Posted by Greenacre Writers at 11:50