A Conversation with Ruth Hogan

Ruth Hogan was born in Bedford. Like many authors she has been an avid reader since childhood and went on to study English and Drama at Goldsmith’s College, University of London. She then took a job in Human Resources for a government department.

Although Ruth enjoyed writing it was only when a car accident left her unable to work full-time that she began to write more seriously. It was all going well until 2012 when Ruth got Cancer – which she describes as ‘bloody inconvenient’. When chemo kept her up all night she passed the time writing and the result was her debut novel.

The Keeper of Lost Things was published in January 2017.


Once a celebrated author of short stories now in his twilight years, Anthony Peardew has spent half his life collecting lost objects, trying to atone for a promise broken many years before. 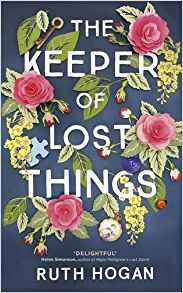 Realising he is running out of time, he leaves his house and all its lost treasures to his assistant Laura, the one person he can trust to fulfil his legacy and reunite the thousands of objects with their rightful owners.

But the final wishes of the 'Keeper of Lost Things' have unforeseen repercussions which trigger a most serendipitous series of encounters...

“Heartwarming and engaging from the start.a mysterious, ghostly, magical love story with some really wonderful characters and a brilliant premise” - The Bookbag

We wish to thank Ruth for taking part in our Conversation and wish her a huge success with her first novel and all the best in her future writing career.


If you’d asked me when I was about six what I wanted to be, I would have said a vet. I had no talent for or interest in the sciences that were required, and no understanding of the years of study it would take. I just loved animals and wanted to make them better. As I grew older and wiser and developed an intense dislike for my chemistry teacher, I moved on to plan b. I’d always loved books, and my parents taught me to read before I started school. From my love of reading, came a love of writing and I decided that I would do something with English. I would be creative and mysterious, henna my hair, and wear strange and exotic outfits. And I did. For the whole three years that I was at Goldsmiths College studying English and Drama. Then I came home, married and got a ‘proper’ job. My career in local government took off and I was rapidly promoted. But then, in my early thirties, I had a car accident that left me with chronic back problems and unable to work full-time. But eventually I came to realise that the accident had given me the opportunity to resurrect the dream I’d had at university of ‘doing something with English’. I got a part-time job to pay the bills and I began to write.

As a writer, I see my role as a story-teller. But I don’t just want to tell the stories, I want to draw the reader completely into the world where my characters live. One of the things I love most about it is finding fresh and original ways of saying things. English is such a rich language, but it is easy to become lazy and use the same tired descriptions and clichés. I can while away hours poring over words in a dictionary!

Portia in Keeper is a detestable little madam, but when I was writing about her reaction to her father’s Alzheimer’s, I did empathise with her fear and the way that she tries to cover it with anger.

I enjoy writing about people who are different or flawed in some way. I genuinely find it more interesting and challenging than writing about so-called ‘normal’ people. But it isn’t always easy. My portrayal of Sunshine (a character who happens to have Down’s Syndrome) in Keeper has been soundly criticised by a small minority of readers, who felt that her portrayal was ‘insensitive’ and ‘patronising’. Of course, everyone is entitled to their own opinion, but I developed Sunshine’s character on the back of considerable research and personal experience and so I’m very happy to stand by what I wrote.

I couldn’t possibly choose just one! I loved the Moomintrolls and the magical world they inhabited, Winnie the Pooh because he’s adorable in a morose kind of way, and I wanted to be Lucy in The Lion, The Witch and the Wardrobe. I was also an avid fan of Enid Blyton’s Famous Five stories, but could never decide whether I wanted to be Anne (she could be a bit wet) or George (I didn’t like her short hair).

I’ve thought about this. A lot! My ideal writing room would be on the second floor of an isolated house right on the beach. My writing room would face the sea and have huge windows. It would also have a balcony where I could sit and write when it’s warm enough. I like to be alone when I’m writing – I’m very happy with my own company (and a dog or three!) and I love the sound and sight of the sea.

Morning's at Seven by Eric Malpass. It’s the book that made me want to be a writer.

It’s a tough game. You can write a brilliant novel, but if it’s not seen by the right people at the right time it might never get published. As well as talent and determination you need a bit of luck. If you don’t love writing, if your story doesn’t wake you in the middle of the night demanding your attention and if you’re easily disheartened, it probably isn’t the career for you. Rejections can be very hard to take, and the chances are you’ll get them. In spades. The thing that kept me going was that I found it impossible not to write. It’s what makes me happy and you need that passion to get you through the bad times.

My next novel is called The Particular Wisdom of Sally Red Shoes, and will be published by Two Roads in spring 2018. It focuses on Masha, an intelligent, independent woman in her early forties whose life has been irremediably changed by a tragic event. Unable to share her grief, she finds solace in the local Victorian cemetery and in her town's lido, where she seeks refuge underwater, safe from the noise and the pain. But a chance encounter with two extraordinary women – the fabulous Kitty Muriel, a convent girl-turned-magician's wife-turned-seventy-something roller disco fanatic, and the mysterious Sally Red Shoes, a bag lady with a prodigious voice – opens up a new world of possibilities, and the chance to start living again.