A Conversation with Harry Parker

Harry Parker grew up in Wiltshire and was educated at University College London. At twenty-three he joined the British Army and served in Iraq in 2007 and Afghanistan in 2009.

Harry's creative side was present from an early age and mainly took the form of drawing and painting. Although he did write some black comedy while in the army, it was an army-funded Arvon creative writing course in 2013 that took his writing to a new level. Writing from his experiences as a soldier, Harry's debut novel Anatomy of a Soldier, took shape.

Harry now lives in London. As well as playing with some ideas for a future novel, Harry attends art school and still loves to paint. He has also completed a post graduate course at the Royal Drawing School and likes to sea-kayak in his spare time.

Anatomy of a Soldier is different from other war novels in the form it takes. Both sides of the conflict is told through a variety of inanimate objects which makes for a very unusual read.

“Captain Tom Barnes is leading British troops in a war zone. Two boys are growing up there sharing a prized bicycle and flying kites, before finding themselves separated once the soldiers appear in their countryside. On all sides of this conflict, people are about to be caught up in the violence, from the man who trains one boy to fight the infidel invaders to Barnes’ family waiting for him to return home.

We see them, not as they see themselves, but as all the objects surrounding them do: shoes and boots, a helmet, a trove of dollars, a drone, that bike, weaponry…and the medical implements that are subsequently employed. 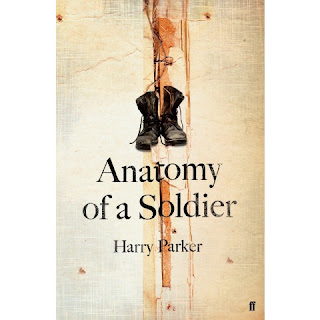 Anatomy of a Soldier is a moving, enlightening and fiercely dramatic novel about one man's journey of survival and the experiences of those around him. forty-five objects, one unforgettable story" -
Faber and Faber.

We wish Harry every success with Anatomy of a Soldier and good luck with his future writing and with life in general.

After I left the Army I had a desk job I wasn’t enjoying very much. I have always practised visual art – drawing and painting – so my wife said I should give it up and do something more creative. I went back to painting but also started writing. I attended a weeklong Arvon course in Devon and the early ideas for Anatomy of a Soldier formed. I set aside a few months and treated writing as job, working nine to five every day. I wrote the first draft in 12 weeks – and then the edits, pursuing agents and the roller coaster of finding a publisher started.

I still feel like a novice and that my role is to get better; to write another book. While working on Anatomy of a Soldier, I felt a responsibility to tell as good a story as I could, but also one that was true to the subject matter I was investigating. When I paint, I always want to depict something about the world that is new and surprising in the hope that an audience would look, acknowledge and understand – to think, ‘God, I’d never thought about it like that before’. I suppose I also aspire to do this with my writing.

I enjoy using my imagination to create a new world or person or feeling or situation. That, and the thrill of the keyboard melting away and the scene pouring out of my head onto the screen… it’s not always like that though.

When writing Anatomy of a Soldier I wanted to write the story of the enemy – the insurgents that plant the bomb that injures the main character. They are on the other side of the conflict and while it might have been easier to dislike them, to dehumanise them as evil for their actions and motives, it was important to me to try and give a balance – why are they involved in the conflict, what are their fears and pressures? It was easy to empathise with them once I’d humanised them.

4. GW recently organised #diverseauthorday: do you think literature accurately reflects the diversity of culture we have today?

I suspect there has never been an easier time to write. Laptops and the Internet mean that anyone can sit down and give it a go… it’s easier to redraft and perhaps we have more disposable time than people did in the past. But it’s easy for me to say that as a white middle-class man who has had a good education. Those opportunities are sadly not available to everyone: inequality in literature probably reflects inequality in our society.

Just to the library to write. I find it difficult to write if there’s anything too interesting going on. But can I please be transported somewhere for a touch of research? Maybe one of Vladimir Putin’s next cabinet meetings or the next time they are making a breakthrough at CERN.

I’m not sure I can answer this – there are so many. A book I read recently which left a huge impression on me was Pincher Martin by William Golding. The writing is brilliant, mirroring the subject matter so that, for example, you are breathless when the main character is drowning. It has such a powerful way of describing the way we experience the world. It’s also unsettling: the ending is shocking and reframes the context of the whole book.

A few things I try to remember: write a book you’d like to read yourself and haven’t read before; and, never hold onto the words too tightly – a phrase or sentence you love and have cherished probably needs to be cut, it will stick out from the rest – cherish the story or idea and let the words support that. Everyone is different though, as all readers are, and what is important to us will be different – advice is never as useful as just writing to find your own way.

Every time I tell someone what I am writing the idea wilts a little and I don’t want it to die. It’s important that I keep it to myself for now, but there are no soldiers.

Anatomy of a Soldier is published by: Faber and Faber

Posted by Greenacre Writers at 07:43