A Conversation with Allen Ashley 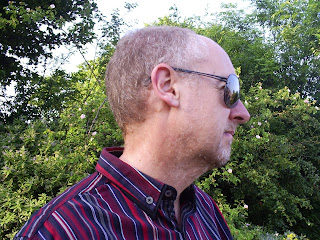 Allen Ashley is the author or editor of 13 books comprising one novel, three short story collections, one book of essays and articles, one poetry collection (“Dreaming Spheres”, PS Publishing 2014, co-written with Sarah Doyle) and seven anthologies of short stories as editor.

In 2006 he won the British Fantasy Award for “Best Anthology” with “The Elastic Book Of Numbers” (Elastic Press, 2005). He is co-host with Sarah Doyle of “Rhyme & Rhythm Jazz-Poetry Club” at The Dugdale Theatre, Enfield.

Allen is a committee member of the British Fantasy Society and is singer and lyricist with the indie rock band The False Dots. He works as a creative writing tutor with five groups currently running across north London. He also works as a critical reader for a reading agency.

Thank you Allen for joining us in conversation and we wish you lots of success with your writing and music.

Like so many others, I have written since I was a child. Stories, songs, cartoon strips, silly versions of well-known rhymes… I think I made my first submission to a magazine when I was 14 or 15. I had an acceptance when I was about 16 but it never actually saw the light of day. I think all authors who have been doing it for a long time will have plenty of these “shaggy dog” stories of promises of publication and apparent breakthroughs that never actually appeared. On the other hand, back in the 1990s I once received a £100 “Kill fee” when a publisher reneged on their contract to run a short story.

My most reprinted story is “Dead To The World”, which first appeared in the award-winning British independent press magazine “Fantasy Tales”. This was then reprinted in book form in the anthology “The Best Horror From Fantasy Tales” (Edited by Stephen Jones and David Sutton, Robinson Publishing) and gave me the boost at the right time to keep going. There’s that Biblical quote about the road to righteousness being covered with stones, thorns and all sorts of hazards. That’s the writing road, actually. Still, after all these years I now have 13 books to my name as author or editor, 150 stories published, countless non-fiction articles and poems. I won the British Fantasy Award in 2006. I have also been short-listed on five other occasions.

I don’t limit myself to one tiny area of the broad writing field. I continue to write, submit and get published regularly. Nowadays, I do a lot of work as an editor, which I absolutely love. I sometimes quip: “Let the authors do the work!” but, in truth, the two great thrills of editing are: discovering a new voice and helping them on their way; and being sent something outstanding that one couldn’t have written oneself.

My great passion is short stories. As I’m not likely to write a “New York Times Bestseller” any moment soon, I earn my living as a critical reader and a creative writing tutor. As some of you reading this will know, I am currently running Novel Focus Group for Greenacre Writers. I also host poetry and spoken word events. Plus I am the judge for the annual British Fantasy Society Short Story Competition – currently open until 30 June 2016. Details here

You’re probably going to want a more fulsome answer than that. OK, I created a character called “Ben Grocott” in my story “Life and Trials” (collected in “Somnambulists” by Allen Ashley, Elastic Press, 2004). This was something of an epistolary story, told via school reports, police reports, the judge’s summing up and so forth. Grocott is shown to be a bully, a thug and a cop killer but some reviewers felt sorry for him calling him “troubled” even though he’d instigated all of the trouble himself. My point: no author can be truly in charge of the characters they create.

I have successfully written many stories from perspectives that are markedly different from my own white male point of view. I have written stories focused on women, on characters of colour and on characters who are physically challenged. My story “A Chip Off The Bloc”, for example, is narrated by a lesbian secret agent for the royal guard battling against a bunch of male pirates.
However, my understanding of “Diverse Author Day” and similar initiatives is that the focus is on encouraging and supporting authors from communities perhaps not fully represented in the broader writing world. As a tutor, I work with authors of varying ages, backgrounds, genders and abilities. All my groups are open to writers wherever they come from; the only requirement is a willingness to improve.

I don’t have a specific fantasy place in mind. Over the years I have taught myself to write (and edit) successfully under all sorts of conditions. Somewhere quiet without distractions is, of course, the ideal. I’m lucky enough to have a study at home where I can settle myself. But I’ve written on buses, tubes, trains, etc. Libraries as well, of course. I find that a good walk can help; a beach walk is excellent in this regard. However, I once wrote a whole poem on the walk from the bus stop to the office I was working at back then. It was a slightly musical piece, too, so I did well to keep it in my head all day until I was able to get home and record it on (showing my age!) a cassette recorder.

This is a slightly difficult question because to have written many of these pieces I would have to have been a different person – i.e. I would have to have actually been J. G. Ballard or William Burroughs. So if I say “The Atrocity Exhibition” or “Cities of the Red Night”, it’s a slightly nonsensical answer because only those guys could have produced those classics.
Of course, there are loads of books, poems, songs and individual stories that I would be proud to have written. Envy should serve as an inspiration. As an editor, one of my great thrills is to receive a story that makes me think: wow, I wish I had written that.

My standard response is one that is perhaps never going to make anybody rich but here goes anyway: Find your own voice. Who wants to be a tribute act? Going through the phase of writing just like your idol/s is a natural part of the learning process, of course; but, ultimately, for you to be fulfilled you want to write in a manner and on subjects that are pertinent to you.
There’s a lot of general advice that I would give to writers: learn the necessary skills, research your markets, edit thoroughly, join a writing group and, perhaps most importantly, don’t expect overnight success. It’s a hard slog. Forever.

I am very pleased to confirm that I will be launching the revised, updated version of my novel “The Planet Suite” at Finchley Literary Festival on the evening of Friday 24 June. I will be reading from the book, be interviewed by Sandra Unerman and conduct a Q & A. As a Finchley boy, I’m really thrilled about this and I hereby advise everyone to attend!!!

I’m hugely busy otherwise with various projects. As mentioned before, I am the sole judge for the British Fantasy Society Short Story Competition. I have also guest-edited an issue of the magazine “Wordland”, which should be released soon. I am working on a new editorial project for the British Fantasy Society aimed at new and emerging writers. Plus I have five creative writing groups on the go.

I can remember changing schools when I was about six. There was only one book available to me in my class in the new school that I hadn’t already read and it was a selection of Grimms’ “Fairy Tales”. I really liked the character of “The Brave Little Tailor” who kills some flies – “Seven with one blow” – but is believed to have slain a giant. Something in that has remained with me, even if it’s only the bluffing element!

Posted by Greenacre Writers at 12:46