A Conversation with Antonia Honeywell 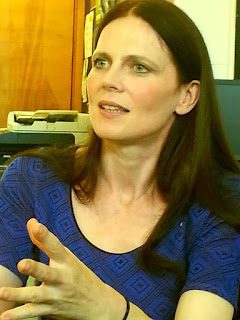 Antonia Honeywell read English at Manchester University, and began her career in the Education Department of the Natural History Museum in London, working with school groups and running creative workshops. She went on to train as a teacher and led departments in a range of schools from a single-sex grammar to an Ofsted-failed inner city comprehensive.

Antonia has four small children, and although she tends to keep them out of her writing life, they’ll inevitably creep in somewhere – usually in the form of tips about writing in spite of them. Though she means that in the nicest possible way. If you look on Antonia’s website, you will see what she and her children are reading from day to week to month!

The Ship is Antonia's debut novel. However, no novice writer is she, having written many novels and with a fierce determination to be published. Letter after rejection letter, she received. Of that time Antonia says:

“For me, the moment I left my metaphorical ship was the moment I decided I was going to carry on writing, even if I never, ever got published.”

The Ship could be described as a dystopian novel. It is set in a time in the not too distant future or possibly an alternative reality. One that could have been a horrible nightmare, if the financial crises in various parts of the world in the nineties had not been contained.

The reader sees an Oxford Street that burned for three weeks. A Regent's Park that has been bombed; and a British Museum occupied by those with nowhere else to go. The Nazareth Act has come into force. If you can't produce your identity card, you will be shot. Lalla, 16, has grown up sheltered from the new reality by her visionary father, Michael Paul. But now the chaos has reached their doorstep.

For as long as she can remember, Lalla’s parents have been talking about the Ship – the vessel that will lead them to a better place along with five hundred carefully selected ‘worthy’ souls. Once on board, as day follows identical day, Lalla's unease grows. Where are they going? What does her father really want? What is the price of salvation?

The Ship was chosen as one of The Independent’s best young-adult fiction books of 2015. featured in the March 2015 issue of Elle Magazine, and was selected as Prima Magazine’s Book Group Choice for February 2015. Antonia was selected as one of Amazon’s Rising Stars of 2015.

The paperback is out on 10th March when Antonia will be at Waterstones Islington talking about the books that inspired her in a free, open to all event with wine and fairy cakes (7:30 pm start) and would be delighted to see you there.

We wish Antonia all the very best with The Ship. A trusted source has said the new novel is fantastic and we can't wait to read it. 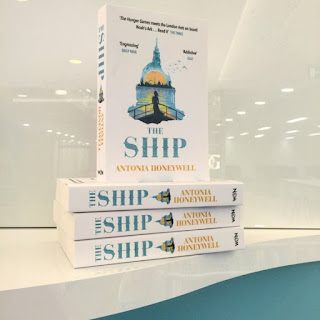 I’ve wanted to write for as long as I’ve been able to read. I wrote my first novel when I was eight, one wet playtime at primary school. It didn’t occur to me that I could be a writer, despite the fact that I wrote constantly and was (still am) a voracious reader. Writers were some kind of mysterious ‘other,’ touched by some magic or privilege I didn’t have access to. It probably didn’t help that for a long time, my favourite authors were dead. I worked in museum education, then went on to train as a teacher. I kept writing. I always wrote. But it didn’t occur to me to submit to agents or push my work at all. I honestly believed that, if the work was good enough, a miracle would happen. When I finally submitted my first novel to agents, I got six rejections and genuinely thought I’d given it a really good go. I thought I was being brave and pragmatic by putting that novel aside and writing another. I know now that six rejections is nothing. It took many years and some significant changes in my life to open my eyes to the fact that simply writing wasn’t enough to make me a writer. I did a writing course. I started telling people that it’s what I wanted to do. I asked for feedback. I began, not only to write, but to work at writing. Ten years of rejections and setbacks later, I held the first printed copy of The Ship.

Over and above all else, I have to write – not in answer to some mystical calling, but because it’s my work. If I don’t create the time to write, and use that time productively, I have no right to call myself a writer. I think it’s important to be open about that. If I’d known any writers when I was growing up, it wouldn’t have made me a better writer, but it would have dispelled the sense that publication wasn’t for people like me. I love meeting readers - not just people who’ve read The Ship (although that’s wonderful) but people for whom reading is as necessary as breathing. But I also love meeting aspiring writers. It’s not only children who need role models and a sense of possibility if they’re to nurture and develop their ambition. Aspiring writers need to know that the vast majority of published writers waded in all that shed life-blood too, and that not a drop of it is wasted.

Yes indeed. Michael in The Ship is a good example of that – I find the way he reacts to the breakdown of society abhorrent, and yet I understand his drive to keep his daughter, Lalla, safe.

I really enjoyed writing Patience in The Ship and creating the story of her African farm and the fate of her family. Initiatives like Diverse Author Day and Diverse December (now renamed Read Diverse) have encouraged me to pay a great deal more attention to my choice of reading, too. I think all writers have a responsibility to reflect diversity not just in the main characters and the stories that are specific to them, but in the supporting cast too. Diverse characters need to be a part of the landscape, as well as the central figure.

Geographically, I’d like to be exactly where I am, here at home. But while I’ve been writing this, I’ve taken in two parcels, fielded a telephone call from youngest child’s school, loaded the dishwasher, put the supper on and helped my mum unfreeze her laptop and (unrelated) make a doctor’s appointment. Another child needs an Egyptian costume for tomorrow and another forgot to take their homework in to school this morning… So I’d like to be right here, right now, but with a human shield who would deal with all those things and bring me a cup of tea now and then.

Oh, that’s an impossible question! I’m tempted to say Cold Comfort Farm because it never fails to make me laugh, or Nineteen Eighty Four, which was the first novel that made me connect the world of literature with the world in which I was living. But those novels belong to their writers – you cannot have the same relationship with a book you’ve written as with one you’ve read. So I think I’ll continue to be grateful to all the incredible writers out there for the books I love, and be very glad that I wrote The Ship.

Only this: as long as you’re not giving up, you’re getting there.

I’ve just finished the penultimate draft of a novel I’ve wanted to write for a long time. It centres on the relationship between a young care leaver and an elderly Polish refugee who owns a Dolls’ Hospital that no one ever visits. It’s currently being read by a trusted specialist; I’ll expect some rewrites as a result and then hand it over to my agent and cross my fingers. In the meantime, I’m working on a children’s novel. I’m not under contract for either, which is both exciting - all that possibility! – and scary, too. Exciting and scary – that’s writing in a nutshell, isn’t it?

Thank you so much for having me.


The Ship by Antonia Honeywell, published by Weidenfeld and Nicolson
You can follow Antonia on Twitter: @antonia_writes
Posted by Greenacre Writers at 15:30