In Conversation with Sunny Singh 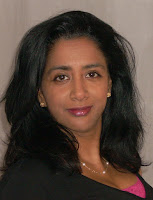 Sunny Singh will be appearing at the Finchley Literary Festival

Sunny Singh was born in Varanasi, India. Her father’s work required the family to move regularly to various locations all over the globe giving Sunny the opportunity to experience many diverse and interesting cultures.

Sunny holds a degree in English and American Literature from Brandeis University, USA and a Masters in Spanish Language, Literature and Culture from Jawaharlal Nehru University, New Delhi. Sunny also obtained a PhD from the University of Barcelona, Spain.

Her first novel Nani’s Book of Suicides (2000) was described by Goodreads as ‘a first novel of exceptional talent’ while her second novel With Krishna’s Eyes (2006) was praised for its ‘profound insight’. Although an outstanding novelist, Sunny does not restrict her writing to fiction. Author of Single In The City: The Independent Woman’s Handbook (2001) Sunny documents her personal experiences and that of other single women in present day India.

As well as having short stories published by distinguished magazines such as World Literature Today and Drawbridge, Sunny has also written academic papers which have been published worldwide.

Currently living in London, Sunny is Lecturer in Creative Writing at the London Metropolitan University, blogs about her passion in politics, and is actively involved with the Jhalak Foundation of which she is the founder. The Jhalak Foundation funds and organises paediatric cardiac surgery for disadvantaged children in India. 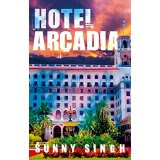 A terrorist attack at the Hotel Arcadia leaves photographer Sam, famous for her war pictures, holed up and unable to leave. Abhi, the Hotel manager and unlikely hero, tries to keep some of the guests safe while his lover, Dieter, is among the hostages held by the terrorists. Billy, a small child, is found alive and Sam looks after him. Inevitably, bonds form between Sam and Abhi and Sam and Billy as their situation becomes desperate.

Hotel Arcadia is a gripping thriller which combines the fear and terror of a hostage situation with the strong bonds that form between people when experiencing such a traumatic event. Among the many excellent reviews the book has received The Independent says it is ‘powerful and absorbing’.

We thank Sunny for answering our questions and wish her every success for Hotel Arcadia and her future writing career.

I always wanted to write stories. One of our neighbours was an acclaimed Hindi writer and I used to be in awe of his library. I was fortunate to grow up in a house full of stories. We had lots of books but the adults – my grandmothers, my parents, uncles and aunts – constantly told stories. From history, from daily life, politics, mythology. Moreover telling stories – real and made-up – was encouraged in my family. This also meant that when I reached my teenage years, I was encouraged to send out work for publication. My first work – a poem – was published when I was fifteen in a newspaper. It was after Indira Gandhi’s assassination. I still remember feeling thrilled to see it in print and simultaneously furious that the editor had ‘changed’ the final stanza to be more hopeful. It was an early lesson in how editing and publishing function.

This means that in addition to my fiction (three novels and a clutch of short stories so far), I also have over ten years of journalistic experience. I have written a non-fiction book on single women in India, the first and only one of its kind so far. I also publish academic research, mostly on film and culture and have just finalised a book for BFI/Palgrave’s film stars series on the Bollywood superstar, Amitabh Bachchan.

I don’t see myself as a writer necessarily, but as someone who writes as a craft and profession. So anything that catches my interest – fiction or nonfiction – gets written up.

Because of the way I grew up and because of political engagement from a very young age, I have always seen the role of a writer as that of bearing witness, of raising ethical and moral questions, speaking truth to power, and of attempting to lead deep structural change. At different times and in different ways, I like to think my writing does some and all of these. I was raised to believe that writing was an exercise of power and therefore, as with all forms of power, needed to be wielded carefully, thoughtfully and with great restraint. I am still learning how to do it well.

As a writer, I love creating narratives that can make a reader think, and hopefully just begin to rethink and even alter their own imaginary and lived worlds a tiny bit.

3. Have you ever created a character who you dislike but find yourself empathising with?
Oh constantly. I write a great deal about armed conflict as well as structural inequities and injustices. I think my first novel – Nani’s Book of Suicides - was written entirely from a standpoint of hating everyone who populated that story world. I understood and empathised, but didn’t like any of them. Even in my latest novel, Hotel Arcadia, I am not fond of Sam. She is not a likeable character in a traditional sense but as I wrote her, I understood her more and found myself mourning on her behalf.

I have been quite fortunate as I grew up reading Indian literature, primarily in Hindi. This means I am used to women who look like me or have similar backgrounds, experiences, worldviews, ambitions within the pages. On the other hand, as I started reading in English, I also grew more alienated. Except for specific writers of colour there are even today few attempts at engaging with the full range of diversity. It is also important to note that writers of colour are still generally put into that specific category rather than seen as writing 'universal' works.

My writing came from this lack. As I moved out of India, I found few stories of women like me. Actually, let's be honest, there are still all too few stories for any women that defy cultural norms and narrative tropes anywhere. So I started writing the women I knew and loved, the women I admired, and also the woman I wanted to become. Increasingly - as my skill and understanding have grown - I have started writing not only women of colour, but also other characters of colour who can be complex, complete and not serve as stand-ins for their race, culture, ethnicity, but exist as full beings.

I would have to say no. And this is not just about going down a checklist of 'types' but trying to reflect the full complexity of our social, lived experience. So there aren't enough non-typical women characters. But there are also not enough queer characters who aren't condemned to tragedy by all too many writers. Or men of colour who can go past the cliches. This is lazy writing at best, and outright damaging at its worst. How will those of us who are not at the elite heart of society learn to value ourselves, or even begin to hold dreams, when we are so comprehensively excluded from narrative.

I don’t know. I am terrible at this because I write best in my own home. I have lived in so many different countries that the geographical location makes little difference to me. But I want my own room, with my books and laptop, my music, and my thoughts. The rest is really immaterial. Having said that, I do like swimming regularly when I am working on something complicated and long so anywhere with a pool nearby is extra lovely.

7. What is the one book you wish you had written?

Is it completely terrible that I can’t think of one? There are many books I love and writers that I admire but I can’t think of one that I wish I had written. Perhaps this is because I had access to a very wide range of books. I began reading Indian (in Hindi, Sanskrit, Prakrit) books but also a lot of book translated into Hindi. This meant that I read Russian literature – translated into Hindi – before I read western works. By the time I was eight, I could read in English which means I read a lot of European, north American, Latin American and African works. Often I would rewrite them in my head, reworking the characters and storylines in ways that I preferred, but I have yet to come across a book that I would wish to write entirely.

8. What advice do you have for would be novelists?

Gosh! This is something I say to my students, don’t I? I would say read. Read as much as you can, and not only fiction. Critical theory, analysis, academic work, all of it. Read as widely and fully as possible. And then read some more. And alongside, keep writing. Keep practising that craft. And I would repeat the advice from my friend’s mum: don’t have contempt for writing for the stomach. It is all practice of the craft and all of it nourishes the writing.

9. What are you currently working on? What can we look forward to reading?

I am currently finalising a collection of short stories around the theme of contemporary warfare. It covers some of the ideas and themes that are closest to me : gender, human rights, injustice. The stories are set and drawn from conflicts across the globe and deliberately focus on people who are often left out of the conventional ‘war stories. ‘ I hope however they manage to convey our shared humanity