A Conversation with AJ Waines 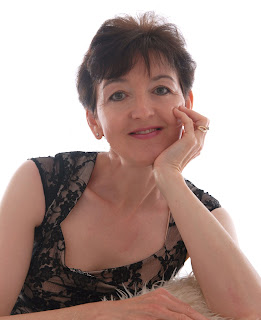 AJ Waines was born in 1959. Before becoming a full time novelist she worked as a Psychotherapist for fifteen years – spending some time working with ex-offenders from high security institutions. The experiences she gained in this work have given her a comprehensive understanding of criminal and abnormal psychology.
AJ’s interest in this area of the human mind led her to publish her first novel, The Evil Beneath -  a successful psychological thriller whose protagonist is a psychotherapist called Juliet Grey. Her second novel Girl on a Train sold over 60,000 copies worldwide.  In July 2015 A Dark Place to Hide was published and now AJ’s fourth thriller, No Longer Safe, has sold 30,000 copies in the first month, in ten countries worldwide. She has publishing deals in France, Germany (Random House) and USA (audiobooks).
AJ Waines currently lives in Southampton with her husband and as well as writing fiction she has published The Self-Esteem Journal (as Alison Waines).


No Longer Safe is a psychological thriller about four friends who meet, after no contact for six years, in a remote cottage for a winter reunion. The dynamics of the friendships have changed from their time at university and as secrets and lies unravel events quickly turn sour. 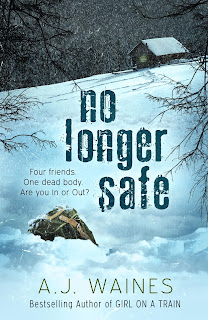 A full review can be seen here

I’ve had a colourful career from professional musician through to psychotherapist, which I enjoyed for 15 years, then writer. I’ve always loved words, images and metaphors and in psychotherapy, these are the means by which we navigate our inner emotional worlds. I pay a lot of attention to how we explore and express what we feel. By 2008, however, I felt quite burnt out with others’ emotional upheavals and started my first piece of fiction. I always thought novelists were superhuman, so I started with a short story – then somehow just kept going until it was a novel! That book got me a top London agent and from then on, I was completely hooked and have never looked back.

I see my role mostly to transport and entertain. I love that feeling, as a reader, of having a gripping book to come back to and if I can deliver that same kind of escapism, I’m delighted. I can categorically say that writing novels has taken over my life! Being both traditionally and independently published, writing has become my ‘business’ and I love co-ordinating the entire book producing process, from start to finish. I’ve learnt a huge amount and it’s been the most challenging and rewarding thing I’ve ever done. The best bit, if I had to choose, would be the writing itself – I completely lose track of time and relish the escape into the scenes of my story. To quote Gloria Steinem: ‘Writing is the only thing that, when I do it, I don't feel I should be doing something else’.

I’ve written plenty of characters with flaws or psychological disturbances, but I hope I portray them in a way that allows the reader to see why they act as they do. My most unpleasant character is probably Mark, in No Longer Safe. He’s moody and a control freak, with very few saving graces – but I loved writing about him! I think central characters need to be complex and compelling and as a former therapist I’m always drawn to the dark side.

It would be inauthentic to set a novel in London (Girl on a Train has scenes in Stockwell and Brixton), without including characters from diverse ethnic backgrounds. I used to live in the centre of Brixton and two of the characters in that book have Afro-Caribbean origins. There is also a character who is blind. It felt important to bring those distinctive personalities to the story.

Ideally, I’d like to be on a veranda overlooking a river. I love The Thames and several of my books include scenes there. In The Evil Beneath, I wanted to capture the two aspects of the River Thames; one as a beautiful and majestic presence winding through the city, the other as a sinister force harbouring unexpected offerings. I love writing about the changing seasons, so even though I hate the cold, it would have to be the UK. A balcony in Hammersmith, Mortlake or Richmond would be perfect!

Notes on a Scandal by Zoe Heller. It’s a very intense slow-burn about obsession, jealousy and betrayal, from the viewpoint of a lonely spinster who finds out her fellow teacher at the school - the young, vivacious woman she’s fixated on - is having an affair with a pupil. It’s a superb psychological thriller.

Don’t worry too much about how ‘good’ it sounds – just get the story down. No one need see those early drafts and you can go back and fill things out, cut them, mend them, improve them at the next stage. This takes the pressure off that first draft straight away.

Set writing goals. I set myself writing targets every day and keep records of how much I’ve written. Then I can see a steady progress and get a sense of achievement.

Never leave your writing at the end of a scene or chapter. I always sketch notes for what is to happen next, so that I can step straight into the feel of the story the next day. A blank page is hard to work with.

I have a Trilogy – a series of three psychological thrillers coming out next. They all feature an intrepid (fictional) Clinical Psychologist, Samantha Willerby, who is based at a hospital in London. She faces extraordinary crimes hidden inside chilling mysteries that test her to the limit. The first book is called Inside the Whispers (due out Autumn 2016) and is about several passengers who recount scenes from the same Tube disaster - an incident, Sam discovers, that they were never involved in. I’m also halfway through writing a first draft of another one!
Thank you for having me!

Posted by Greenacre Writers at 09:40