Anatomy of a Soldier by Harry Parker 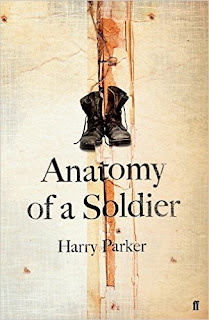 Captain Tom Barnes, BA5799, is commanding British soldiers in a war zone and the story begins with Captain Barnes being airlifted out in a helicopter after stepping on an IED. The location of the war zone is not identified but we learn that it is hot and dusty.

The account of events preceding and following Captain Barnes’ catastrophic injuries is told from the perspective of inanimate objects giving this war story a very original feel. The first chapter is told from the view of BA5799’s tourniquet that had resided in the darkness of a pocket until being called into action.

“I was placed on BA5799. I was turned. I tightened. I closed around his leg until his pulse pushed up against me. And he grimaced and whimpered through gritted teeth. I was wound tighter, gripping his thigh; stopping him bleed into the dust.”

Those first few pages of Anatomy of a Soldier set the scene for the novel; of the devastation that is the nature of war. The following chapter, narrated by a bag of fertiliser, introduces Latif – an insurgent and enemy of the British soldiers – and his childhood friend Faridun. The two meet at a checkpoint and Latif informs his fellow insurgents that Faridun’s father is working for the infidels causing Faridun to be assaulted. The two friends have different views of the conflict and this is another casualty of war. Although they are supposedly on the same side, different opinions divide families and friends.

Tom Barnes is a captain who leads his troops in a dedicated and stoical manner and we see him struggle for survival while doctors fight to save his life. We follow his long and slow recovery and the distress and anguish experienced by family and friends as they try to help him through this traumatic period of his life.

Although the story is told from the view of objects, Harry Parker has succeeded brilliantly in giving the characters their own defining personalities. The objects succeed in conveying depth of feeling and emotion through these characters.  The bed listens as Tom explains to his mother, both of whom are sitting on the bed, that he wouldn’t change a thing that has happened to him.  He knows his life has changed irrevocably but has accepted who he is. It is both moving and inspiring.

It is a story that follows both the troops and insurgents and shows how war shatters both sides of the conflict. Death, destruction and suffering leaves nobody untouched. Despite fighting a war the enemy are still seen as human. Their suffering and that of their families is never undermined. Anatomy of a Soldier is a beautifully written book with extremely vivid imagery. One chapter is written from the view of the infection spreading through Barnes’ leg.

“I was inside your leg, deep among flesh that was torn and churned…I spread out into the hypoxic and devitalised tissue of your leg. I made you feverish and feasted unseen on your insides, defeating you. I made you wish you’d never survived.”

Another original feature of the novel is that the chapters do not run in chronological order and this fractured structure reflects the chaotic and fragmented experiences that accompany such a harrowing event as that experienced by Tom Barnes.

Harry has written a poignant and moving novel which makes for compelling reading. It is of course tragic because of the nature of the story but it is also inspiring and uplifting as we follow Captain Barnes’ journey from devastating injury to acceptance of his new way of living.

We wish Harry lots of luck for the future and hope to see another novel from him sometime soon. His style of writing and use of language makes for fantastic reading.

You can read more about Harry in Conversation with Greenacre Writers

Anatomy of a Soldier is published by: Faber and Faber and we would like to thank them for the review copy.

Posted by Greenacre Writers at 16:21