World Book Night is celebrated on 23 April and run by The Reading Agency.
Because everything changes when we read.
Today!!! Saturday 23 April, UNESCO International Day of the Book, Shakespeare’s birthday and also the 400th anniversary of his death, 187,500 copies of 15 specially printed World Book Night titles will be given by a network of volunteer reading enthusiasts and institutions around the UK focussing on reaching the 36% of the UK population who don’t read for pleasure.

This is the sixth World Book Night and my fifth year of volunteering. I work at the North Middlesex University Hospital in the medical library and decided to get them involved last year as an 'institution giver' as well as my usual homeless organisation in Finchley. Plus I'm an advocate of fiction in amongst all those very helpful but occasionally gruesome medical books.

2016’s list of titles sees a sensational line up designed to bring reading and books into people’s lives. It covers a range of genres including crime, poetry, non-fiction, Quick Reads, historical and contemporary fiction, fantasy and memoir. Appearing on the list are bestselling favourites from the leading lights of the literary scene, designed to reach a wide audience including adults and young people dealing with mental health issues. Books this year include Holly Bourne’s Am I Normal Yet?, Love Poems by Carol Ann Duffy, Matt Haig’s Reasons To Stay Alive, The Rotters’ Club by Jonathan Coe, Treachery by SJ Parris and Ann Cleeves’ Too Good To Be True. 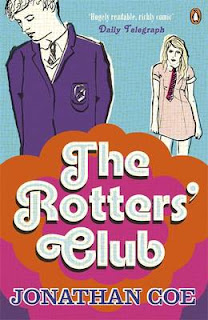 When you become a volunteer you are asked to choose three books with the proviso you may not get any of them. I got my first choice The Rotters Club, by Jonathan Coe.

The Rotter's Club is set in the 1970s against a distant backdrop of strikes, terrorist attacks and growing racial tension. A group of young friends inherit the editorship of their school magazine and begin to put their own distinctive spin onto events in the wider world. A zestful comedy of personal and social upheaval, The Rotters’ Club captures a fateful moment in British politics – the collapse of ‘Old Labour’ – and imagines its impact on the topsy-turvy world of the bemused teenager: a world in which a lost pair of swimming trunks can be just as devastating as an IRA bomb.
Jonathan Coe, says:
I’m delighted to be part of World Book Night 2016. Reading is the best possible way to foster imagination, empathy and mutual understanding, and never have those qualities been more needed than at the present time.
I personally like to choose Quick Reads because if you're homeless, in all likelihood you won't have access to many books and quite likely will find it difficult to read because concentration levels, due to the trauma of not having a home, are quite simply all over the place. I feel that a Quick Reads book is a perfect way to reintroduce anyone to the wonderful art of reading.
Quick Reads sets out to show that books and reading can be for everyone. Each year they commission big name authors to write short books that are specifically designed to be easy to read. They are the same as mainstream books in every respect but are simply shorter and easier to tackle. The books are then sold through major retailers, online booksellers and are loaned from libraries. They celebrated their 10th anniversary this year, read more about that here.

Since the inaugural World Book Night in 2011, an extraordinary group of 56,000 volunteers has been created, giving books away to over 2.25 million people.
This year’s World Book Night impact report is the first to measure the impact on end-users, the recipients of the books. It reveals that the event prompts recipients to do more than simply read the book they receive: in many cases they go on to re-evaluate their relationship with books. Delight at receiving a book translates into action, especially for those who were previously not frequent readers:
Many recipients said that World Book Night prompted them to re-engage with books and helped them discover new, relevant texts; this in turn gave them increased self-confidence as a reader and increased their awareness of the reading material available to them.
2000 institutions nationwide will be taking part in this year’s World Book Night mass giveaway, including libraries, hospitals, prisons, colleges, schools and homeless shelters.

In a new initiative for 2016 publishers will also giving out copies of their own stock on Friday 22 April within their neighbourhoods. This will increase the number of books being given away as part of the celebrations and highlights the unique opportunity World Book Night presents for givers to become better connected with their local communities.
Penguin Random House UK is donating a copy of Ali Smith’s Public Library and Other Stories to every library in the UK to tie in with World Book Night. In a letter to librarians Ali Smith says:

“This year on 23 April we celebrate World Book Night, an occasion that marks the transformative power of books: to inspire, transport and comfort, to unlock the mind, to nourish the soul. In honour of this moment, please find enclosed a copy of my short story collection Public library and other stories, which I am sending as a gift to every library in the UK.”

As well as the World Book Night volunteers, people are encouraged to give their favourite book to someone in their community and special events are taking place at libraries, community centres, prisons, hospitals and schools around the UK on 23rd April, in this mass celebration of books and reading. So, why not choose a book from your bookshelves and give it away. Read more here about events taking place all over the UK. And it's not too late to buy tickets to the flagship World Book Night event at the British Library.
Posted by Rosie Longstocking at 13:02