Do Not Say We Have Nothing by Madeleine Thien

Last July, while reading the shortlist for the Man Booker Prize 2016, I came across Do Not Say We Have Nothing, by Madeleine Thien and experienced that feeling which we writers fear the most second to rejection- that of our work having been explored by another in advance, thus rendering our hours of creativity, often times painful, redundant. So it was with great trepidation that I ordered the book and set about seeing if my own ideas and script were still valuable. 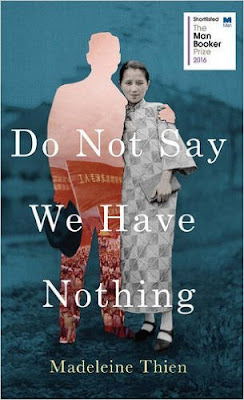 Set in Shanghai, Beijing and Canada, and spanning 60 years, the story opens when Li- ling (known by her English name Marie), recalls the mystery of her father’s (Kai) death in 1989 at the time of the Tiananmen Square massacre. A couple of months later, Marie’s mother receives a letter from a woman in China asking them to provide shelter for her daughter, Ai Ming, Sparrow’s daughter, who has fled China in the aftermath of the protests. Through Ai Ming and her own diligent research, Marie pieces together the intricate details of her father who, “ In a single year left us twice”, first by ending his marriage to her mother by going to Hong Kong to meet Sparrow, and secondly, by committing suicide.

Madeleine Thien, skilfully charts the impact of The Cultural Revolution, on two gifted musicians in the Shanghai Conservatory who have an illicit love for each other. Sparrow, a composer and mentor to Kai, a concert pianist, experience the   pressures on their musical talent within the rigours of the Communist regime.  The main plot in the novel exposes us to the decisions which these two musicians, and Sparrow’s 14-year-old violinist cousin Zhuli, are forced to make under political pressure which have long term implications on all their relationships inter se.

We are graphically led through the contemporary political setting with the labour camps, routine beatings, public humiliations and denunciations of all those who found themselves on the wrong side of the Cultural Revolution.

The heartbeat of the novel is that creativity can be stifled forcefully during political oppression, but loses its power over courageous artists who would rather die than compromise their artistic souls in the face of fear.

Thien enlightens us about the political background to the Tiananmen protests by setting the middle aged Sparrow, his wife Ling and Ai Ming, into the web of political coercion, using the contemporary events to propel the story forwards and ultimately to Canada.

Although intricate in detail, the novel is at times, hard to follow by the use of multiple narrative points of view ranging from Marie, Ai Ming, Sparrow, Zhuli, her mother Big Mother Knife, Wen the Dreamer, to other minor characters in an attempt to weave all the different stories together.  This technique, although highly ambitious, distorted the flow of the novel as I found myself having to reread many sections of the prose to decipher which of the stories I was following, thus making reading a rather disjointed process rather than one of lyrical fluidity.

The novel is not easy to read- it is long, the pace is slow and lacks dramatic tension to keep us engaged due to the over abundance of description and the introduction of excessive sub characters who seem to have been introduced to enlighten the reader to yet another historical feature of the Cultural Revolution. For example the introduction of the ‘study group’ with various characters in the subplot is to enlighten us as to the effect of contemporary political flavour on literature but I feel that its inclusion is superfluous.  Historical fiction is hard to craft as it is difficult to avoid the story becoming a textbook of facts and Thien does for me, veer into the territory of trying to cram too many details into her story and this weighs down the pace of the novel.

To avoid any hint of plagiarism I’ve reread the novel with a highly critical eye, absorbing all the details with great precision.  I had to change aspects of my own novel which coincidentally teetered on the verge of being slightly similar to Thien’s, but it is with great conviction that I’m currently editing my novel throughout, wondering on the one hand how someone I’ve never heard of prior to her book being published, could have thought of setting her novel in the Shanghai Conservatory during the same era, but realising even more that the chances of this being almost impossible assures me that my story is authentic and as a voice which deserves to be heard!

I would recommend the novel to readers with an interest in historical fiction but   beware, a great amount of patience is needed in order to sift through all the numerous story lines, not to mention absorb all the characters and their Sino-Western names.
Posted by Greenacre Writers at 13:39

One of the most difficult books I've ever read. But it was worth the struggle.